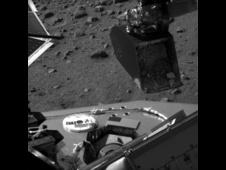 TUCSON, Ariz. -- NASA's Phoenix Mars Lander made its first dig into Martian soil for science studies and is poised to deliver the scoopful to a laboratory instrument on the lander deck.

The instrument will bake and sniff the soil to assess its volatile ingredients, such as water.

Commands were received by Phoenix Friday, June 6, for the spacecraft's Robotic Arm to dump the sample into an opened door on the instrument called the Thermal and Evolved-Gas Analyzer, or TEGA.

"It's looks like a good sample for us," said Peter Smith, Phoenix principal investigator at the University of Arizona, Tucson. "Over the next few days, and it may be as much as a week, the TEGA instrument will be analyzing this sample."

Phoenix's Robotic Arm collected the sample of clumpy, reddish material from the top 2 to 4 centimeters (0.8 to 1.6 inches) of surface material at a site informally named "Baby Bear" on the north side of the lander. In the past week, engineers had used the arm to collect two practice scoops adjacent to Baby Bear and dump those scoopfuls back onto the surface. They have prepared for years with simulations and versions of the arm on Earth.

"It's like being on a football team and having a pre-season that lasted five years, and now we're finally playing first game," said Matt Robinson, of NASA's Jet Propulsion Laboratory, Pasadena, Calif. He is the robotic arm flight software lead for the Phoenix team.

The move was calculated to get enough material to be sure to get some delivered into the instrument without inundating the instrument with unnecessary extra soil. "We're ecstatic that we got a quarter to a third of a scoopful," Robinson said.

The TEGA instrument will begin analyzing the sample for water and mineral content after it has analyzed a sample of the Martian atmosphere. Water can be bound to minerals, such as clays or carbonates, and it takes more heat to drive the water off some minerals than others. This is how the instrument can identify some minerals in the soil.

"We are particularly interested in minerals that are formed or altered by the action of liquid water in the soil," Smith said.

The Phoenix mission is led by Smith at the University of Arizona with project management at JPL and development partnership at Lockheed Martin, Denver. International contributions come from the Canadian Space Agency; the University of Neuchatel, Switzerland; the universities of Copenhagen and Aarhus, Denmark; Max Planck Institute, Germany; and the Finnish Meteorological Institute. For more about Phoenix, visit: http://www.nasa.gov/phoenix and http://phoenix.lpl.arizona.edu. Media contacts: Guy Webster 818-354-6278
Jet Propulsion Laboratory, Pasadena, Calif.
guy.webster@jpl.nasa.gov