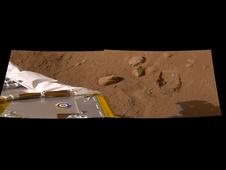 The Robotic Arm took a second scoop full of soil and revealed whitish material at the bottom of the dig area informally called the "Knave of Hearts". Image credit: NASA/JPL-Caltech/University of Arizona
› Full image and caption
› Latest press and raw images
› Latest videos

TUCSON, Ariz. -- Two practice rounds of digging and dumping the clumpy soil at the Martian arctic site this week gave scientists and engineers gathered at the University of Arizona confidence to begin using Phoenix's Robotic Arm to deliver soil samples to instruments on the lander deck.

Those samples will not be collected before Thursday. Following Wednesday's briefing on the mission, the Phoenix team learned that NASA's Odyssey orbiter, which relays Phoenix data to and from Earth, had entered a "safe mode," preventing Wednesday's (or sol 10) instructions from reaching the lander. Instead, Phoenix will complete a sequence of commands that are already stored on board. That sequence includes instructions for the lander to continue taking images required to assemble a full-color 360-degree high-resolution panorama.

Odyssey mission managers are doing a check out of the orbiter to determine what triggered the safe mode. During safe mode, the spacecraft turns off non-essential operations and waits for instructions from Earth. In the meantime, the Phoenix team has been directed to issue commands to the lander and receive data through Mars Reconnaissance Orbiter (MRO). While Phoenix has been primarily utilizing Odyssey for relay services since MRO's UHF radio unexpectedly powered off during a relay pass on Sol 2, the radio has been exercised repeatedly over the past week and appears to be operating well.

The two practice digs have already enticed scientists about some bright material in the soil just beneath the surface.

"Two scoops into the soil we see there's a white layer becoming visible in the wall of the trench," said Carol Stoker of NASA Ames Research Center, Moffett Field, Calif., a member of the Phoenix science team.

Phoenix Principal Investigator Peter Smith said, "We've had an impassioned discussion of whether that may be salts or ice or some other material even more exotic."

Concentrations of salts can be indicators of formerly wet conditions. One goal for the Phoenix mission is to determine whether the ice beneath the surface of far-northern Mars ever thaws during long-term climate cycles.

The location chosen for the sample is adjacent to the hole dug by the two practice scoops. The team plans to command the arm to deliver the sample to the lander's Thermal and Evolved-Gas Analyzer (TEGA), after it first receives images to confirm that the scoop holds collected soil ready for delivery.

"The arm has been performing flawlessly," said Ashitey Trebi-Ollennu of NASA's Jet Propulsion Laboratory, senior robotics engineer on the Phoenix Robotic Arm team. The arm made daring, Tai Chi or Yoga-like moves to position the Robotic Arm Camera to take pictures underneath the lander, and did its two test digs "magnificently," he said.

Phoenix is the first mission to dig into Mars with a robotic arm since the Viking landers in the 1970s.

"We have only dug to a depth of an inch or two, so we know there are challenges ahead," Trebi-Ollennu added. "But we are confident that we'll get a good amount of material to deliver to TEGA."

In addition to the bright material seen where the arm collected test samples, a layer of hard, light-toned substrate has been seen in images taken underneath the lander by the Robotic Arm Camera.

"We think the lander is sitting on a layer of this white material that possibly extends beyond, out into our work area," said Uwe Keller, Robotic Arm Camera lead scientist from the Max Planck Institute for Solar System Research, Katlenburg-Lindau, Germany. Phoenix's telltale, which is part of the Canadian Space Agency's meteorological package and the highest part of the lander, has proved to be very sensitive to Martian winds, said Haraldur Gunnlaugsson of the University of Aarhus, Denmark, which provided the device.

"A storm on Mars is a gentle hand movement on Earth," Gunnlaugsson said. Surface Stereo Imager images of the telltale show a diurnal pattern to Martian winds. Winds come from the south in the morning, blow in from the north by mid-day, from the west in the afternoon, and again from the south by the end of the day.

Knowledge of wind direction and speed is important to prevent possible contamination of samples during digging.

The Phoenix mission is led by Smith at the University of Arizona with project management at JPL and development partnership at Lockheed Martin, Denver. International contributions come from the Canadian Space Agency; the University of Neuchatel, Switzerland; the universities of Copenhagen and Aarhus, Denmark; Max Planck Institute, Germany; and the Finnish Meteorological Institute. For more about Phoenix, visit: http://www.nasa.gov/phoenix and http://phoenix.lpl.arizona.edu .