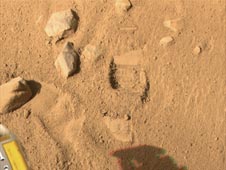 One week after landing on far-northern Mars, NASA Phoenix spacecraft lifted its first scoop of Martian soil as a test of the lander's Robotic Arm.

The practice scoop was emptied onto a designated dump area on the ground after the Robotic Arm Camera photographed the soil inside the scoop. The Phoenix team plans to have the arm deliver its next scoopful, later this week, to an instrument that heats and sniffs the sample to identify ingredients.

A glint of bright material appears in the scooped up soil and in the hole from which it came. "That bright material might be ice or salt. We're eager to do testing of the next three surface samples collected nearby to learn more about it," said Ray Arvidson of Washington University in St. Louis, Phoenix co-investigator for the Robotic Arm.

The camera on the arm examined the lander's first scoop of Martian soil. "The camera has its own red, green and blue lights, and we combine separate images taken with different illumination to create color images," said the University of Arizona's Pat Woida, senior engineer on the Phoenix team.

The Phoenix mission is led by Peter Smith at the University of Arizona with project management by NASA's Jet Propulsion Laboratory, Pasadena, Calif., and development partnership at Lockheed Martin, Denver. International contributions come from the Canadian Space Agency; the University of Neuchatel, Switzerland; the universities of Copenhagen and Aarhus, Denmark; Max Planck Institute, Germany; and the Finnish Meteorological Institute. For more about Phoenix, visit: http:// www.nasa.gov/phoenix and http://phoenix.lpl.arizona.edu. 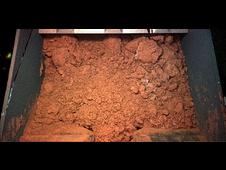