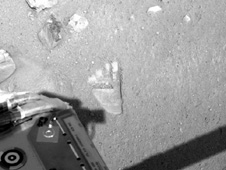 This view from the Surface Stereo Imager on NASA's Phoenix Mars Lander shows the first impression –- dubbed Yeti and shaped like a wide footprint -- made on the Martian soil by the robotic arm scoop on Sol 6, the sixth Martian day of the mission, (May 31, 2008). Image credit: NASA/JPL-Caltech/University of Arizona
› Full image and caption
› Latest press and raw images
› Latest videos

NASA's Phoenix Mars Lander reached out and touched the Martian soil for the first time on Saturday, May 31, the first step in a series of actions expected to bring soil and ice to the lander's experiments.

The lander's Robotic Arm scoop left an impression that resembles a footprint at a place provisionally named Yeti in the King of Hearts target zone, away from the area that eventually will be sampled for evaluation.

The impression in the soil was captured by Phoenix's Stereo Surface Imager. Features and locations around the Phoenix lander are being named for fairy tale and mythological characters.

"This first touch allows us to utilize the Robotic Arm accurately. We are in a good situation for the upcoming sample acquisition and transfer," said David Spencer, Phoenix's surface mission manager from NASA's Jet Propulsion Laboratory in Pasadena, Calif.

Phoenix's Robotic Arm Camera also took a number of images of the "Snow Queen" site of what is believed to be exposed ice under the lander.

"What we see in the images is in agreement with the notion that it may be ice, and we suspect we will see the same thing in the digging area," said Uwe Keller, Robotic Arm Camera lead scientist from the Max Planck Institute for Solar System Research, Katlenburg-Lindau, Germany. 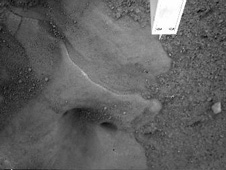