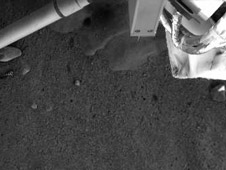 As seen in the top center of this image from Phoenix, the exhaust from the descent engine has blown soil off to reveal either rock or ice, which has not yet been determined. Image credit: NASA/JPL-Calech/University of Arizona
› Full image and caption
› Latest press and raw images
› Latest videos

TUCSON, Ariz.-- Scientists have discovered what may be ice that was exposed when soil was blown away as NASA's Phoenix spacecraft landed on Mars last Sunday, May 25. The possible ice appears in an image the robotic arm camera took underneath the lander, near a footpad.

"We could very well be seeing rock, or we could be seeing exposed ice in the retrorocket blast zone," said Ray Arvidson of Washington University, St. Louis, Mo., co-investigator for the robotic arm. "We'll test the two ideas by getting more data, including color data, from the robotic arm camera. We think that if the hard features are ice, they will become brighter because atmospheric water vapor will collect as new frost on the ice.

"Full confirmation of what we're seeing will come when we excavate and analyze layers in the nearby workspace," Arvidson said.

Testing last night of a Phoenix instrument that bakes and sniffs samples to identify ingredients identified a possible short circuit. This prompted commands for diagnostic steps to be developed and sent to the lander in the next few days. The instrument is the Thermal and Evolved Gas Analyzer. It includes a calorimeter that tracks how much heat is needed to melt or vaporize substances in a sample, plus a mass spectrometer to examine vapors driven off by the heat. The Thursday, May 29, tests recorded electrical behavior consistent with an intermittent short circuit in the spectrometer portion.

"We have developed a strategy to gain a better understanding of this behavior, and we have identified workarounds for some of the possibilities," said William Boynton of the University of Arizona, Tucson, lead scientist for the instrument.

The latest data from the Canadian Space Agency's weather station shows another sunny day at the Phoenix landing site with temperatures holding at minus 30 degrees Celsius (minus 22 degrees Fahrenheit) as the sol's high, and a low of minus 80 degrees Celsius (minus 112 degrees Fahrenheit). The lidar instrument was activated for a 15-minute period just before noon local Mars time, and showed increasing dust in the atmosphere.

"This is the first time lidar technology has been used on the surface of another planet," said the meteorological station's chief engineer, Mike Daly, from MDA in Brampton, Canada. "The team is elated that we are getting such interesting data about the dust dynamics in the atmosphere."

The mission passed a "safe to proceed" review on Thursday evening, meeting criteria to proceed with evaluating and using the science instruments.

"We have evaluated the performance of the spacecraft on the surface and found we're ready to move forward. While we are still investigating instrument performance such as the anomaly on TEGA [Thermal and Evolved Gas Analyzer], the spacecraft's infrastructure has passed its tests and gets a clean bill of health," said David Spencer of NASA's Jet Propulsion Laboratory, Pasadena, Calif., deputy project manager for Phoenix.

"We're still in the process of checking out our instruments," Phoenix project scientist Leslie Tamppari of JPL said. "The process is designed to be very flexible, to respond to discoveries and issues that come up every day. We're in the process of taking images and getting color information that will help us understand soil properties. This will help us understand where best to first touch the soil and then where and how best to dig."

The Phoenix mission is led by Peter Smith at the University of Arizona with project management at JPL and development partnership at Lockheed Martin, Denver. International contributions come from the Canadian Space Agency; the University of Neuchatel, Switzerland; the universities of Copenhagen and Aarhus, Denmark; Max Planck Institute, Germany; and the Finnish Meteorological Institute. For more about Phoenix, visit: http://www.nasa.gov/phoenix and http://phoenix.lpl.arizona.edu. Media contacts: Guy Webster 818-354-6278
Jet Propulsion Laboratory, Pasadena, Calif.
guy.webster@jpl.nasa.gov