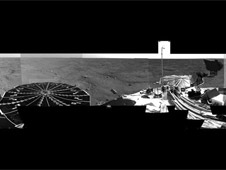 TUCSON, Ariz. - NASA's Mars lander is returning more detailed images from the Martian surface and is now preparing its instruments for science operations.

"We've imaged the entire landing site, all 360 degrees of it. We see it all," said Phoenix principal investigator Peter Smith, University of Arizona, Tucson. "You can see the lander in a fish-eye view that goes all the way out to the entire horizon "We are now making plans for where to dig first, and what we'll save for later."

Commands were communicated to Phoenix to rotate the robotic arm's wrist to unlatch its launch lock, raise the forearm and move it upright to release the elbow restraint.

"We're pleased that we successfully unstowed the robotic arm. In fact, this is the first time we have moved the arm in about a year," said Matthew Robinson of NASA's Jet Propulsion Laboratory in Pasadena, Calif. The arm deployment brings the Phoenix mission to a significant milestone.

"We have achieved all of our engineering characterization prerequisites, with all the critical deployments behind us," said JPL's Barry Goldstein, Phoenix project manager. "We're now at a phase of the mission where we're characterizing the science payload instruments. That's a very important step for us."

After a health check that tests the arm at a range of warmer and colder temperatures, the titanium and aluminum arm will soon be tasked with its first assignment: to use its camera to look under the spacecraft to assess the terrain and underside of the lander.

The robotic arm will later trench into the icy layers of northern polar Mars and deliver samples to instruments that will analyze what this part of Mars is made of, what its water is like, and whether it is or has ever been a possible habitat for life.

Another milestone for the mission included the activation of the laser instrument called light detection and ranging instrument, or lidar.

"The Canadians are walking on moonbeams. It's a huge achievement for us," said Jim Whiteway Canadian Science lead from York University, Toronto. The lidar is a critical component of Phoenix's weather station, provided by the Canadian Space Agency. The instrument is designed to detect dust, clouds and fog by emitting rapid pulses of green laser-like light into the atmosphere. The light bounces off particles and is reflected back to a telescope.

"One of the main challenges we faced was to deliver the lidar from the test lab in Ottawa, Canada, to Mars while maintaining its alignment within one one-hundredth of a degree," said Whiteway. "That's like aiming a laser pointer at a baseball at a distance from home plate to the center field wall, holding that aim steady after launch for a year in space, then landing," he added.

Lidar data shows dust aloft to a height of 3.5 kilometers (2 miles). The weather at the Phoenix landing site on the second day following landing was sunny with moderate dust, with a high of minus 30 degrees Celsius (minus 22 degrees Fahrenheit) and a low of minus 80 (minus 112 degrees Fahrenheit).