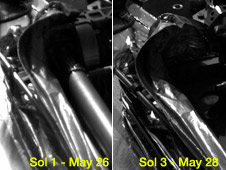 Updated May 29, 1 a.m. Eastern
Phoenix successfully completed the first day of a two-day process to deploy its robotic arm.


Scientists leading NASA's Phoenix Mars mission from the University of Arizona in Tucson sent commands to unstow its robotic arm and take more images of its landing site early today.

The Phoenix lander sent back new sharp color images from Mars late yesterday. Phoenix imaging scientists made a color mosaic of images taken by the lander's Surface Stereo Imager on landing day, May 25, and the first two full "sols," or Martian days, after landing.

The panorama, now about one-third complete, shows a fish-eye perspective from the camera, a view from the lander itself all the way to the horizon. Phoenix adjusts its color vision with "Caltargets," calibrated color targets on disks mounted on the landing deck. Its color vision isn't quite like human color vision, but close.

"These images are very exciting to the science team," said the Surface Stereo Imager co-investigator Mark Lemmon of Texas A&M University. "We see the polygons we're looking for, and we're very excited to fill in the context with more site pan images that go beyond the workspace." Images to complete the panorama are planned today and tomorrow, Sols 3 and 4, Lemmon said.

"We appear to have landed where we have access to digging down a polygon trough the long way, digging across the trough, and digging into the center of a polygon. We've dedicated this polygon as the first national park system on Mars -- a "keep out" zone until we figure out how best to use this natural Martian resource," Lemmon said.

Phoenix will use its robotic arm to dig first in another area seen in the panorama, an area outside the preserved polygon. 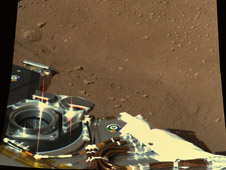 The northern polar plains of Mars can be seen in approximate true color in this image taken by NASA's Mars Phoenix Lander. Image credit: NASA/JPL-Calech/University of Arizona
› Full image and caption Robotic arm manager Bob Bonitz of NASA's Jet Propulsion Laboratory, Pasadena, Calif., explained how the arm is to be unstowed today. "It's a series of seven moves, beginning with rotating the wrist to release the forearm from its launch restraint. Another series of moves releases the elbow from its launch restraints and moves the elbow from underneath the biobarrier."

The robotic arm is a critical part of the Phoenix Mars mission. It is needed to trench into the icy layers of northern polar Mars and deliver samples to instruments that will analyze what Mars is made of, what its water is like, and whether it is or has ever been a possible habitat for life.

The robotic arm's first movement was delayed by one day when Tuesday's commands from Earth did not get all the way to the Phoenix lander on Mars. The commands went to NASA's Mars Reconnaissance Orbiter as planned, but the orbiter's Electra UHF radio system for relaying commands to Phoenix temporarily shut off. Without new commands, the lander instead carried out a set of activity commands sent Monday as a backup. Images and other information from those activities were successfully relayed back to Earth by the Mars Reconnaissance Orbiter Tuesday evening. 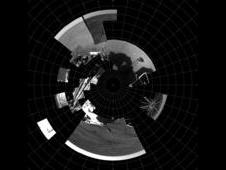 This image shows a polar projection mosaic of all data received as of the end of sol 2 from the right eye of the Surface Stereo Imager (SSI) instrument on board the Phoenix lander. Image credit: NASA/JPL-Caltech/University of Arizona/Texas A&M University
› Full image and caption
Wednesday morning's uplink to Phoenix and evening downlink from Phoenix were planned with NASA's Mars Odyssey orbiter as the relay. "We are using Odyssey as our primary link until we have a better understanding of what happened with Electra," Goldstein said.

The Phoenix mission is led by Peter Smith at the University of Arizona with project management at JPL and development partnership at Lockheed Martin, Denver. International contributions come from the Canadian Space Agency; the University of Neuachatel, Switzerland; the universities of Copenhagen and Aarhus, Denmark; Max Planck Institute, Germany; and the Finnish Meteorological Institute. For more about Phoenix, visit http://www.nasa.gov/phoenix and http://phoenix.lpl.arizona.edu.