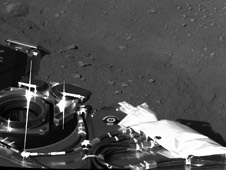 This raw, or unprocessed, image was taken by Phoenix on its second sol, or Mars day, May 27, 2008. Image credit: NASA/JPL-Caltech/Univ. or Arizona
› Larger view
› Latest press and raw images
› Latest videos
NASA's Mars Reconnaissance Orbiter successfully received information from the Phoenix Mars Lander Tuesday evening and relayed the information to Earth. The relayed transmission included images and other data collected by Phoenix during the mission's second day after landing on Mars.

The UHF radio system used by the orbiter to communicate with the lander had gone into a standby mode earlier Tuesday for a still undetermined cause. This prevented sending Phoenix any new commands from Earth on Tuesday. Instead, the lander carried out a backup set of activity commands that had been sent Monday.

NASA's Mars Odyssey orbiter is scheduled for relaying commands to the lander on Wednesday morning.