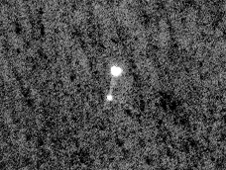 The image from the High Resolution Imaging Science Experiment (HiRISE) on NASA's Mars Reconnaissance Orbiter marks the first time ever one spacecraft has photographed another one in the act of landing on Mars.

Meanwhile, scientists pored over initial images from Phoenix, the first ever taken from the surface of Mars' polar regions. Phoenix returned information that it was in good health after its first night on Mars, and the Phoenix team sent the spacecraft its to-do list for the day.

"We can see cracks in the troughs that make us think the ice is still modifying the surface," said Phoenix Principal Investigator Peter Smith of the University of Arizona, Tucson. "We see fresh cracks. Cracks can't be old. They would fill in."

Camera pointing for the image from HiRISE used navigational information about Phoenix updated on landing day. The camera team and Phoenix team would not know until the image was sent to Earth whether it had actually caught Phoenix.

"We saw a few other bright spots in the image first, but when we saw the parachute and the lander with the cords connecting them, there was no question," said HiRISE Principal Investigator Alfred McEwen, also of the University of Arizona. 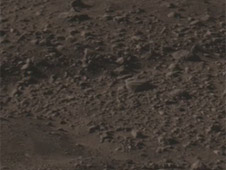 This movie shows the vast plains of the northern polar region of Mars, as seen by NASA's Phoenix Mars Lander shortly after touching down on the Red Planet. Image credit: NASA/JPL-Caltech/University of Arizona/Texas A&M
› Play video "I'm floored. I'm absolutely floored," said Phoenix Project Manager Barry Goldstein of NASA's Jet Propulsion Laboratory, Pasadena, Calif. A team analyzing what can be learned from the Phoenix descent through the Martian atmosphere will use the image to reconstruct events.

HiRISE usually points downward. For this image, the pointing was at 62 degrees, nearly two-thirds of the way from straight down to horizontal. To tilt the camera, the whole orbiter must tilt. Mars Reconnaissance Orbiter was already pointed toward the expected descent path of Phoenix to record radio transmissions from Phoenix.

McEwen said, "We've never taken an image at such an oblique angle before."

Monday's tasks for Phoenix include checkouts of some instruments and systems, plus additional imaging of the lander's surroundings.

JPL manages the Mars Reconnaissance Orbiter mission for NASA. Lockheed Martin Space Systems, Denver, Colo., is the prime contractor for the project and built the spacecraft. The University of Arizona operates the High Resolution Imaging Science Experiment camera, which was built by Ball Aerospace and Technology Corp., Boulder, Colo.