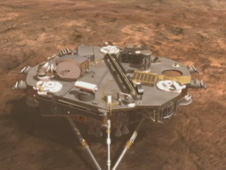 Artist's concept of the Phoenix spacecraft on Mars. Image credit: NASA/JPL-Calech/University of Arizona PASADENA, Calif. -- NASA's Phoenix spacecraft landed in the northern polar region of Mars today to begin three months of examining a site chosen for its likelihood of having frozen water within reach of the lander's robotic arm.

Radio signals received at 4:53:44 p.m. Pacific Time (7:53:44 p.m. Eastern Time) confirmed the Phoenix Mars Lander had survived its difficult final descent and touchdown 15 minutes earlier. The signals took that long to travel from Mars to Earth at the speed of light.

Among those in the JPL control room was NASA Administrator Michael Griffin, who noted this was the first successful Mars landing without airbags since Viking 2 in 1976.

"For the first time in 32 years, and only the third time in history, a JPL team has carried out a soft landing on Mars," Griffin said. "I couldn't be happier to be here to witness this incredible achievement." 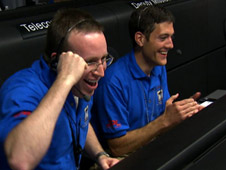 Team members celebrate Phoenix landing on Mars.
Larger view During its 422-million-mile flight from Earth to Mars after launching on Aug. 4, 2007, Phoenix relied on electricity from solar panels during the spacecraft's cruise stage. The cruise stage was jettisoned seven minutes before the lander, encased in a protective shell, entered the Martian atmosphere. Batteries provide electricity until the lander's own pair of solar arrays spread open.

"We've passed the hardest part and we're breathing again, but we still need to see that Phoenix has opened its solar arrays and begun generating power," said JPL's Barry Goldstein, the Phoenix project manager. If all goes well, engineers will learn the status of the solar arrays between 7 and 7:30 p.m. Pacific Time (10 and 10:30 p.m. Eastern Time) from a Phoenix transmission relayed via NASA's Mars Odyssey orbiter.

The team will also be watching for the Sunday night transmission to confirm that masts for the stereo camera and the weather station have swung to their vertical positions.

"What a thrilling landing! But the team is waiting impatiently for the next set of signals that will verify a healthy spacecraft," said Peter Smith of the University of Arizona, principal investigator for the Phoenix mission. "I can hardly contain my enthusiasm. The first landed images of the Martian polar terrain will set the stage for our mission."

Another critical deployment will be the first use of the 7.7-foot-long robotic arm on Phoenix, which will not be attempted for at least two days. Researchers will use the arm during future weeks to get samples of soil and ice into laboratory instruments on the lander deck.

The signal confirming that Phoenix had survived touchdown was relayed via Mars Odyssey and received on Earth at the Goldstone, Calif., antenna station of NASA's Deep Space Network.

Phoenix uses hardware from a spacecraft built for a 2001 launch that was canceled in response to the loss of a similar Mars spacecraft during a 1999 landing attempt. Researchers who proposed the Phoenix mission in 2002 saw the unused spacecraft as a resource for pursuing a new science opportunity. Earlier in 2002, Mars Odyssey discovered that plentiful water ice lies just beneath the surface throughout much of high-latitude Mars. NASA chose the Phoenix proposal over 24 other proposals to become the first endeavor in the Mars Scout program of competitively selected missions.

The Phoenix mission is led by Smith at the University of Arizona with project management at JPL and development partnership at Lockheed Martin, Denver. International contributions come from the Canadian Space Agency; the University of Neuchatel, Switzerland; the universities of Copenhagen and Aarhus, Denmark; Max Planck Institute, Germany; and the Finnish Meteorological Institute. For more about Phoenix, visit http://www.nasa.gov/phoenix .