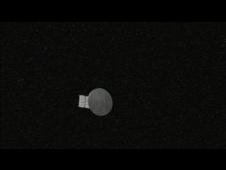 This artist's montage shows NASA's Phoenix spacecraft en route to Mars. Image credit: NASA/JPL-Calech/University of Arizona
+ Play narrated landing animation
Landing ellipse
PASADENA, Calif. -- NASA's Phoenix Mars Lander sped on Sunday morning toward its arrival at Mars, as the tug of the Red Planet's gravity accelerated the craft during the final day of its trip from Earth to Mars.

"Mars is literally pulling on our spacecraft, and at the same time it is pulling on our emotions," Phoenix Principal Investigator Peter Smith, of the University of Arizona, Tucson, said early Sunday afternoon. "We are excited at how close we are right now to beginning our study of a site where Martian water ice will be within our reach, after all these years of preparations. Our science mission begins as the spacecraft settles into its new home on Mars."

Phoenix was on track for anticipated entry into the atmosphere at 4:30p.m. Pacific Time and reaching the surface at 4:38 p.m., although confirmation of those events comes no sooner than 15 minutes, 20 seconds later, due to the time needed for radio signals to travel from Mars to Earth.

"We are so well on course that those adjustments were not necessary," said Phoenix Project Manager Barry Goldstein of NASA's Jet Propulsion Laboratory, Pasadena, Calif.

The most challenging part of the entire mission, getting from the top of the atmosphere to a safe landing on three legs, still lies ahead. Internationally, only five of the 11 attempts to land a spacecraft on Mars have succeeded.

The Phoenix mission is led by Smith, with project management at JPL. The development partnership is with Lockheed Martin, Denver. International contributions are from the Canadian Space Agency; the University of Neuchatel, Switzerland; the universities of Copenhagen and Aarhus, Denmark; the Max Planck Institute, Germany; and the Finnish Meteorological Institute.