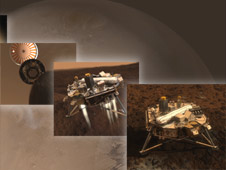 Phoenix is so well on course for its Sunday-evening landing on an arctic Martian plain that the team decided it was not necessary to do a trajectory correction 21 hours before landing.

However, the team left open the option of a correction maneuver eight hours before landing, if warranted by updated navigational information expected in the intervening hours.

Sunday at 4:53 p.m. Pacific Time is the first possible time for confirmation that Phoenix has landed. The landing would have happened 15 minutes earlier on Mars, but the radio signals take 15 minutes to travel from Mars to Earth at the distance separating the two planets today.

- A decision will be made this afternoon, Sat., May 24, about whether to perform one more trajectory correction maneuver later tonight.

- A dust cloud that NASA's Mars Reconnaissance Orbiter has been tracking is moving across the landing area today. It is not expected to pose any hazard to the landing.

- As of noon PDT today, Phoenix had 1.28 million miles left to travel out of its 422-million-mile flight from Earth to Mars.