Phoenix Spacecraft on Course for May 25 Mars Landing 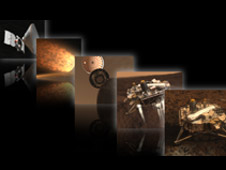 "The latest calculation from our navigation team shows the center of the area where we're currently headed lies less than eight miles from the center of our target area," said Barry Goldstein, Phoenix project manager at NASA's Jet Propulsion Laboratory, Pasadena, Calif. "We may decide on Saturday that we don't need to use our final opportunity for fine tuning the trajectory Phoenix is on. Either way, we will continue to monitor the trajectory throughout Saturday night, on the off chance we need to execute our contingency maneuver eight hours before entry."

The spacecraft is in fine health.

"All systems are nominal and stable," said Ed Sedivy, Phoenix spacecraft program manager for Lockheed Martin Space Systems, Denver, which built the spacecraft. "We have plenty of propellant, the temperatures look good and the batteries are fully charged."

The spacecraft is closing in on the scariest seven minutes of the mission.

On Sunday, shortly after the annual 500-mile race at the Indianapolis Motor Speedway, Phoenix will be approaching Mars at about 12,750 miles per hour, a speed that could cover 500 miles in 2 minutes and 22 seconds. After it enters the top of the Martian atmosphere at that velocity, it must use superheated friction with the atmosphere, a strong parachute and a set of pulsing retrorockets to achieve a safe, three-legged standstill touchdown on the surface in just seven minutes.

The earliest possible time when mission controllers could get confirmation from Phoenix indicating it has survived landing will be at 4:53 p.m. Pacific Time on Sunday (7:53 p.m. Eastern Time). Of 11 previous attempts that various nations have made to land spacecraft on Mars, only five have succeeded.

Phoenix will land farther north on Mars than any previous mission, at a site expected to have ice-rich permafrost beneath the surface, but within reach of the lander's robotic arm.

"Last instructions were given to the science team at our final meeting at the University of Arizona Tuesday," said Phoenix Principal Investigator Peter Smith of the University of Arizona, Tucson. "This week, we are conducting our dress rehearsal before opening night on Sunday." The science team is slowly adjusting to working on Mars time, in which each day lasts 24.66 hours, in preparation for a demanding mission.

Smith said, "We are ready to robotically operate our science lab in the Martian arctic and dig through the layers of history to the ice-rich soil below."

Phoenix is equipped to study the history of the water now frozen into the site's permafrost, to check for carbon-containing chemicals that are essential ingredients for life, and to monitor polar-region weather on Mars from a surface perspective for the first time.

The Phoenix mission is led by Smith at the University of Arizona with project management at JPL and development partnership at Lockheed Martin. International contributions come from the Canadian Space Agency; the University of Neuchatel, Switzerland; the universities of Copenhagen and Aarhus, Denmark; Max Planck Institute, Germany; and the Finnish Meteorological Institute. For more about Phoenix, visit: http://www.nasa.gov/phoenix and http://phoenix.lpl.arizona.edu .