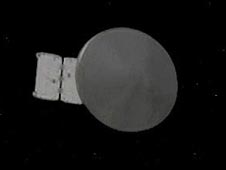 PASADENA, Calif. -- NASA engineers have adjusted the flight path of the Phoenix Mars Lander, setting the spacecraft on course for its May 25 landing on the Red Planet.

"This is our first trajectory maneuver targeting a specific location in the northern polar region of Mars," said Brian Portock, chief of the Phoenix navigation team at NASA's Jet Propulsion Laboratory in Pasadena, Calif. The mission's two prior trajectory maneuvers, made last August and October, adjusted the flight path of Phoenix to intersect with Mars.

NASA has conditionally approved a landing site in a broad, flat valley informally called "Green Valley." A final decision will be made after NASA's Mars Reconnaissance Orbiter takes additional images of the area this month.

The orbiter's High Resolution Imaging Science Experiment camera has taken more than three dozen images of the area. Analysis of those images prompted the Phoenix team to shift the center of the landing target 13 kilometers (8 miles) southeastward, away from slightly rockier patches to the northwest. Navigators used that new center for planning today's maneuver.

The landing area is an ellipse about 62 miles by about 12 miles (100 kilometers by 20 kilometers). Researchers have mapped more than five million rocks in and around that ellipse, each big enough to end the mission if hit by the spacecraft during landing. Knowing where to avoid the rockier areas, the team has selected a scientifically exciting target that also offers the best chances for the spacecraft to set itself down safely onto the Martian surface.

"Our landing area has the largest concentration of ice on Mars outside of the polar caps. If you want to search for a habitable zone in the arctic permafrost, then this is the place to go," said Peter Smith, principal investigator for the mission, at the University of Arizona, Tucson.

Phoenix will dig to an ice-rich layer expected to lie within arm's reach of the surface. It will analyze the water and soil for evidence about climate cycles and investigate whether the environment there has been favorable for microbial life.

"We have never before had so much information about a Mars site prior to landing," said Ray Arvidson of Washington University in St. Louis. Arvidson is chairman of the Phoenix landing-site working group and has worked on Mars landings since the first successful Viking landers in 1976.

"The environmental risks at landing -- rocks and slopes -- represent the most significant threat to a successful mission. There's always a chance that we'll roll snake eyes, but we have identified an area that is very flat and relatively free of large boulders," said JPL's David Spencer, Phoenix deputy project manager and co-chair of the landing site working group.

Today's trajectory adjustment began by pivoting Phoenix 145 degrees to orient and then fire spacecraft thrusters for about 35 seconds, then pivoting Phoenix back to point its main antenna toward Earth. The mission has three more planned opportunities for maneuvers before May 25 to further refine the trajectory for a safe landing at the desired location.

In the final seven minutes of its flight on May 25, Phoenix must perform a challenging series of actions to safely decelerate from nearly 21,000 kilometers per hour (13,000 mph). The spacecraft will release a parachute and then use pulse thrusters at approximately 914 meters (3,000 feet) from the surface to slow to about 8 kilometers per hour (5 mph) and land on three legs.

"Landing on Mars is extremely challenging. In fact, not since the 1970s have we had a successful powered landing on this unforgiving planet. There's no guarantee of success, but we are doing everything we can to mitigate the risks," said Doug McCuistion, director of NASA's Mars Exploration Program at NASA Headquarters in Washington.

The Phoenix mission is led by Peter Smith of the University of Arizona, Tucson, with project management at JPL and development partnership at Lockheed Martin, Denver. International contributions are provided by the Canadian Space Agency; the University of Neuchatel, Switzerland; the universities of Copenhagen and Aarhus, Denmark; the Max Planck Institute, Germany; and the Finnish Meteorological Institute.