Spacecraft at Mars Prepare to Welcome New Kid on the Block 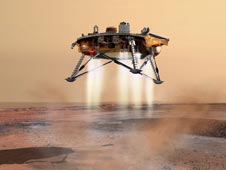 This artist's concept depicts NASA's Phoenix Mars Lander a moment before its planned touchdown on the arctic plains of Mars in May 2008. Image credit: NASA/JPL-Calech/University of Arizona
›  Full image and caption
Three Mars spacecraft are adjusting their orbits to be over the right place at the right time to listen to NASA's Phoenix Mars Lander as it enters the Martian atmosphere on May 25.

Every landing on Mars is difficult. Having three orbiters track Phoenix as it streaks through Mars' atmosphere will set a new standard for coverage of critical events during a robotic landing. The data stream from Phoenix will be relayed to Earth throughout the spacecraft's entry, descent and landing events. If all goes well, the flow of information will continue for one minute after touchdown.

"We will have diagnostic information from the top of the atmosphere to the ground that will give us insight into the landing sequence," said David Spencer of NASA's Jet Propulsion Laboratory, Pasadena, Calif., deputy project manager for the Phoenix Mars Lander project. This information would be valuable in the event of a problem with the landing and has the potential to benefit the design of future landers.

Bob Mase, mission manager at JPL for NASA's Mars Odyssey orbiter, said, "We have been precisely managing the trajectory to position Odyssey overhead when Phoenix arrives, to ensure we are ready for communications. Without those adjustments, we would be almost exactly on the opposite side of the planet when Phoenix arrives."

NASA's Mars Reconnaissance Orbiter is making adjustments in bigger increments, with one firing of thrusters on Feb. 6 and at least one more planned in April. The European Space Agency's Mars Express orbiter has also maneuvered to be in place to record transmissions from Phoenix during the landing. Even the NASA rovers Spirit and Opportunity have been aiding preparations, simulating transmissions from Phoenix for tests with the orbiters.

Launched on Aug. 4, 2007, Phoenix will land farther north than any previous mission to Mars, at a site expected to have frozen water mixed with soil just below the surface. The lander will use a robotic arm to put samples of soil and ice into laboratory instruments. One goal is to study whether the site has ever had conditions favorable for supporting microbial life.

Phoenix will hit the top of the Martian atmosphere at 5.7 kilometers per second (12,750 miles per hour). In the next seven minutes, it will use heat-shield friction, a parachute, then descent rockets to slow to about 2.4 meters per second (5.4 mph) before landing on three legs.

Odyssey will tilt from its normally downward-looking orientation to turn its ultrahigh-frequency (UHF) antenna toward the descending Phoenix. As Odyssey receives a stream of information from Phoenix, it will immediately relay the stream to Earth with a more capable high-gain antenna. The other two orbiters, Mars Reconnaissance Orbiter and Mars Express, will record transmissions from Phoenix during the descent, as backup to ensure that all data is captured, then transmit the whole files to Earth after the landing. "We will begin recording about 10 minutes before the landing," said JPL's Ben Jai, mission manager for Mars Reconnaissance Orbiter.

The orbiters' advance support for the Phoenix mission also includes examination of potential landing sites, which is continuing. After landing, the support will include relaying communication between Phoenix and Earth during the three months that Phoenix is scheduled to operate on the surface. Additionally, NASA and European Space Agency ground stations are performing measurements to determine the trajectory of Phoenix with high precision.

With about 160 million kilometers (100 million miles) still to fly as of late February, Phoenix continues to carry out testing and other preparations of its instruments. The pressure and temperature sensors of the meteorological station provided by the Canadian Space Agency were calibrated Feb. 27 for the final time before landing. "The spacecraft has been behaving so well that we have been able to focus much of the team's attention on preparations for landing and surface operations," Spencer said.

The Phoenix mission is led by Peter Smith of the University of Arizona, Tucson, with project management at JPL and development partnership at Lockheed Martin, Denver. International contributions are provided by the Canadian Space Agency; the University of Neuchatel, Switzerland; the universities of Copenhagen and Aarhus, Denmark; the Max Planck Institute, Germany; and the Finnish Meteorological Institute. Additional information on Phoenix is online at http://www.nasa.gov/phoenix and http://phoenix.lpl.arizona.edu . JPL, a division of the California Institute of Technology in Pasadena, manages Mars Odyssey and Mars Reconnaissance Orbiter for the NASA Science Mission Directorate, Washington. Additional information on NASA's Mars program is online at http://www.nasa.gov/mars .