Phoenix left Earth Aug. 4, bound for a challenging touchdown on May 25, 2008, at a site farther north than any previous Mars landing. It will robotically dig to underground ice and run laboratory tests assessing whether the site could ever have been hospitable to microbial life. 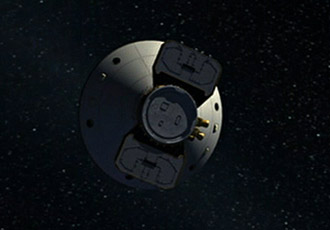 Key activities in the next few weeks will include checkouts of science instruments, radar and the communication system that will be used during and after the landing.

The second trajectory-correction maneuver is planned for mid-October. "These first two together take out the bias intentionally put in at launch," said JPL's Brian Portock, Phoenix navigation team chief. Without the correction maneuvers, the spacecraft's course after launch day would miss Mars by about 950,000 kilometers (590,000 miles), an intentional offset to prevent the third stage of the launch vehicle from hitting Mars. The launch vehicle is not subject to the rigorous cleanliness requirements that the spacecraft must meet as a protection against letting Earth organisms get a foothold on Mars.

The burn began at 11:30 a.m. Pacific Daylight Time. Each of the four trajectory-correction thrusters provides about 15.6 newtons (3.5 pounds) of force. Smaller, attitude-control thrusters pivoted the spacecraft to the desired orientation a few minutes before the main burn and returned it afterward to the right orientation for catching solar energy while communicating with Earth. Their thrust capacity is about 4.4 newtons (1 pound) apiece. The twelve largest thrusters on Phoenix, delivering about 293 newtons (66 pounds) apiece, will operate only during the final minute before landing on Mars.