NASA's Phoenix Mars Mission Gets Thumbs Up for 2007 Launch
NASA has given the green light to a project to put a long-armed lander onto the icy ground of the far-northern martian plains. NASA's Phoenix lander is designed to examine the site for potential habitats for water ice and to look for possible indicators of life, past or present.

Today's announcement allows the Phoenix mission to proceed with preparing the spacecraft for launch in August 2007. This major milestone followed a critical review of the project's planning progress and preliminary design since its selection in 2003. 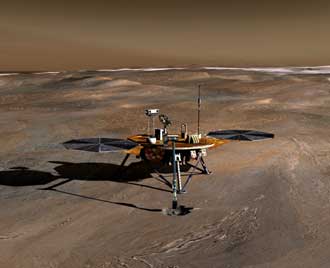 Phoenix is the first project in NASA's Mars Scout Program of competitively selected missions. Scouts are innovative and relatively low-cost complements to the core missions of the agency's Mars exploration program.

"The Phoenix Mission explores new territory in the northern plains of Mars analogous to the permafrost regions on Earth," said the project's principal investigator, Dr. Peter Smith of the University of Arizona, Tucson. "NASA's confirmation supports this project and may eventually lead to discoveries relating to life on our neighboring planet."

Phoenix is a stationary lander. It has a robotic arm to dig down to the martian ice layer and deliver samples to sophisticated analytical instruments on the lander's deck. It is specifically designed to measure volatiles, such as water and organic molecules, in the northern polar region of Mars. In 2002, NASA's Mars Odyssey orbiter found evidence of ice-rich soil very near the surface in the arctic regions.

Like its namesake, Phoenix rises from ashes, carrying the legacies of two earlier attempts to explore Mars. The 2001 Mars Surveyor lander, administratively mothballed in 2000, is being resurrected for Phoenix. Many of the scientific instruments for Phoenix were built or designed for that mission or the unsuccessful Mars Polar Lander in 1999.

"The confirmation review is an important step for all major NASA missions," said JPL's Barry Goldstein, project manager for Phoenix. "This approval essentially confirms NASA's confidence that the spacecraft and science instruments will be successfully built and launched, and that once the lander is on Mars, the science objectives can be successfully achieved."

Much work lies ahead. Team members will assemble and test every subsystem on the spacecraft and science payload to show they comply with design requirements. Other tasks include selecting a landing site, which should be aided by data provided by the Mars Reconnaissance Orbiter launching in August, and preparing to operate the spacecraft after launch.