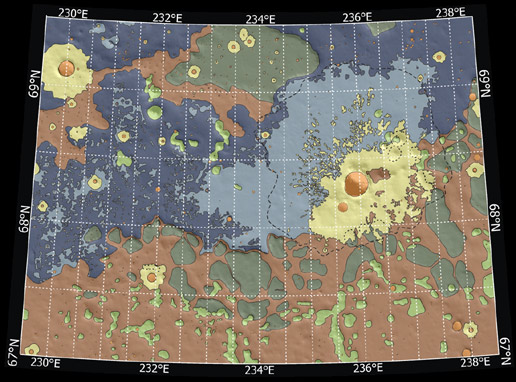 Launch date makes a difference in the orientation of ellipses marking where NASA's Phoenix Mars Lander will have a high probability of landing, given the planned targeting for the spring 2008 landing site. This map shows possible landing ellipses for the Aug. 3, 2007, opening of the launch period (the ellipse oriented northwest to southeast) and for launch dates at the middle and end of the three-week period of launch opportunities.

The map also shows a color-coded interpretation of geomorphic units -- categories based on the surface textures and contours. The yellow-coded area surrounding a crater informally named "Heimdall" appears to have even fewer boulders on the surface than other units.

The geomorphic mapping is overlaid on a shaded relief map based on data from the Mars Orbiter Laser Altimeter on NASA's Mars Global Surveyor orbiter. The red box indicates the location of an image RA4-CTX from the Context Camera on NASA's Mars Reconnaissance Orbiter.