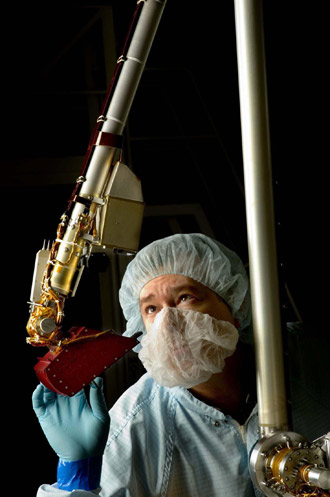 A vital instrument on NASA's Phoenix Mars Lander is the robotic arm, which will dig into the icy soil and bring samples back to the science deck of the spacecraft for analysis. In September 2006 at a Lockheed Martin Space Systems clean room facility near Denver, spacecraft technician Billy Jones inspects the arm during the assembly phase of the mission.

Using the robotic arm -- built by the Jet Propulsion Laboratory, Pasadena -- the Phoenix mission will study the history of water and search for complex organic molecules in the ice-rich soil.

The Phoenix mission is led by Principal Investigator Peter H. Smith of the University of Arizona, Tucson, with project management at NASA's Jet Propulsion Laboratory and development partnership with Lockheed Martin Space Systems. International contributions for Phoenix are provided by the Canadian Space Agency, the University of Neuchatel (Switzerland), the University of Copenhagen, and the Max Planck Institute in Germany. JPL is a division of the California Institute of Technology in Pasadena.