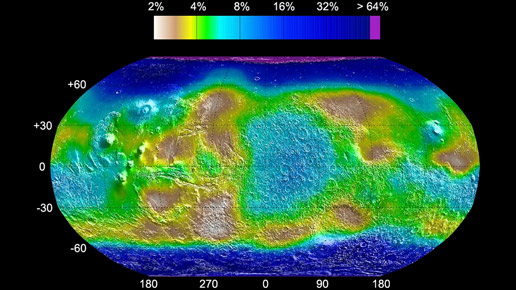 This map shows the estimated lower limit of the water content of the upper meter of Martian soil. The estimates are derived from the hydrogen abundance measured by the neutron spectrometer component of the gamma ray spectrometer suite on NASA's Mars Odyssey spacecraft.

The highest water-mass fractions, exceeding 30 percent to well over 60 percent, are in the polar regions, beyond about 60 degrees latitude north or south. Farther from the poles, significant concentrations are in the area bound in longitude by minus 10 degrees to 50 degrees and in latitude by 30 degrees south to 40 degrees north, and in an area to the south and west of Olympus Mons (30 degrees to 0 degrees south latitude and minus 135 degrees to 110 degrees longitude).

NASA's Jet Propulsion Laboratory, a division of the California Institute of Technology in Pasadena, manages the 2001 Mars Odyssey mission for the NASA Office of Space Science in Washington. Investigators at Arizona State University in Tempe, the University of Arizona in Tucson and NASA's Johnson Space Center, Houston, operate the science instruments. The gamma-ray spectrometer was provided by the University of Arizona in collaboration with the Russian Aviation and Space Agency, which provided the high-energy neutron detector, and the Los Alamos National Laboratories, New Mexico, which provided the neutron spectrometer. Lockheed Martin Space Systems, Denver, is the prime contractor for the project, and developed and built the orbiter. Mission operations are conducted jointly from Lockheed Martin and from JPL.