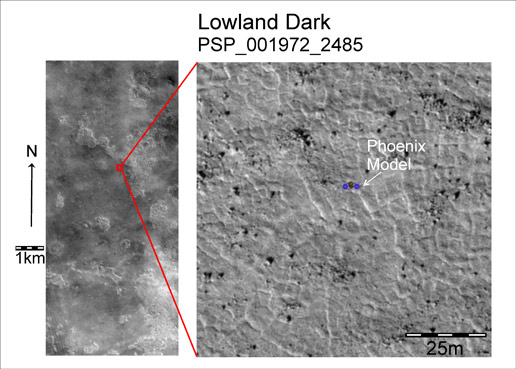 Researchers assessing the targeted landing area for NASA's Phoenix Mars Lander have used images from a powerful telescopic camera on NASA's Mars Reconnaissance Orbiter to count rocks in and around the intended landing area.

This image from the orbiter's High Resolution Imaging Science Experiment (HiRISE) camera shows ground with a farily high abundance of rocks, west of the landing target. It also shows patterned ground, fractured into polygons. Similar polygonal patterns can be found in some areas of repeated freezing and thawing on Earth. The relief of the polygons in this image is highlighted by a low sun angle.

For scale, an illustration of the Phoenix lander, which is about 5.5 meters (18 feet) by 2 meters (7 feet), is artificially superimposed on a full-resolution subset of HiRISE image (right).

HiRISE took this image on Dec. 28, 2006. The full image (most of which is shown on the left) is centered at 68.5 degrees north latitude, 231.8 degrees east longitude. It covers terrain categorized as "lowland dark" by researchers evaluating the landing site. The image is calalogued as HiRISE PSP_001972_2485.