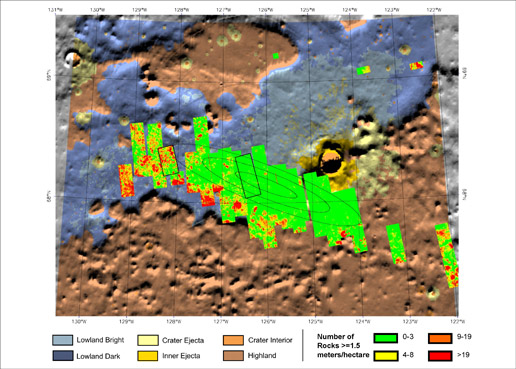 Bright green indicates areas with few large rocks on this shaded relief map of the area in and around the targeted landing site for NASA's Mars Phoenix Lander.

The rectangular patches color-coded with bright green, red and yellow are areas where rock abundance has been tabulated from images taken by the High Resolution Imaging Science Experiment camera on NASA's Mars Reconnaissance Orbiter. The key is on the legend of the map. For example, each hectare (2.5 acres) of the green-coded areas has three or fewer rocks with a width of 1.5 meters (5 feet) or more. The red-coded areas have more then 19 rocks that size per hectare.

Phoenix will reach Mars on May 25, 2008. The center of the targeted landing area is at the center of the set of ellipses superimposed on the map. Plans call for navigating Phoenix to hit a target at the top of Mars' atmosphere so that the spacecraft will have a 66 percent chance of landing within the smallest of the three ellipses and a 99 percent chance of landing within the largest of the three.

The rock-abundance coding on this map covers up portions of a different set of color-coding, for various terrain units in the area. An impact crater informally named "Heimdall" lies in the orange-coded area northeast of the targeted landing site. The crater is about 10 kilometers (6 miles) wide.

A pair of rectangles highlighted with dark outlines show the location of two specific images from the High Resolution Imaging Science Experiment: image PSP_001906_2485 near the center of the target ellipses, and image PSP_001972_2485 at the western tip of the largest ellipse.