Polygon Patterned Ground on Mars and on Earth 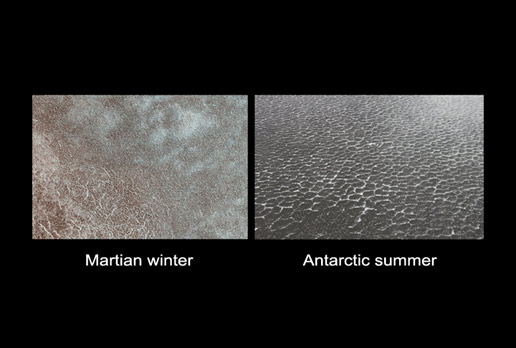 Some high-latitude areas on Mars (left) and Earth (right) exhibit similarly patterned ground where shallow fracturing has drawn polygons on the surface.

This patterning may result from cycles of freezing and thawing.

The left image shows ground within the targeted landing area NASA's Phoenix Mars Lander before the winter frost had entirely disappeared from the surface.

The bright ice in shallow crevices accentuates the area's polygonal fracturing pattern. The polygons are a few meters (several feet) across.

The image is a small portion of an exposure taken in March 2008 by the High Resolution Imaging Science Experiment (HiRISE) camera on NASA's Mars Reconnaissance Orbiter.

The image on the right is an aerial view of similarly patterned ground in Antarctica.