Animation of Panorama of Phoenix’s Solar Panel and Robotic Arm 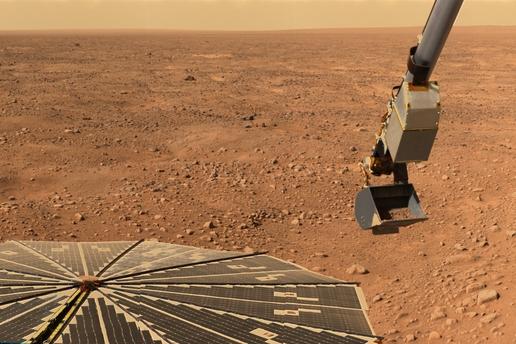 This is an animation of panorama images of NASA’s Phoenix Mars Lander’s solar panel and the lander’s Robotic Arm with a sample in the scoop. The image was taken just before the sample was delivered to the Optical Microscope.

The images making up this animation were taken by the lander’s Surface Stereo Imager looking west during Phoenix’s Sol 16 (June 10, 2008), or the 16th Martian day after landing. This view is a part of the "mission success" panorama that will show the whole landing site in color.

The Phoenix Mission is led by the University of Arizona, Tucson, on behalf of NASA. Project management of the mission is by NASA’s Jet Propulsion Laboratory, Pasadena, Calif. Spacecraft development is by Lockheed Martin Space Systems, Denver.