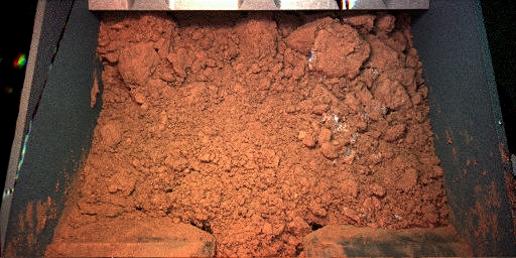 This image from NASA's Phoenix Mars Lander's Robotic Arm Camera (RAC) shows material from the Martian surface captured by the Robotic Arm (RA) scoop during its first test dig and dump on the seventh Martian day of the mission, or Sol 7 (June 1, 2008). The test sample shown was taken from the digging area informally known as "Knave of Hearts."

Scientists speculate that the white patches on the right side of the image could possibly be ice or salts that precipitated into the soil. Scientists also speculate that this white material is probably the same material seen in previous images from under the lander in which an upper surface of an ice table was observed. The color for this image was acquired by illuminating the RA scoop with a set of red, green, and blue light-emitting diodes (LEDs).