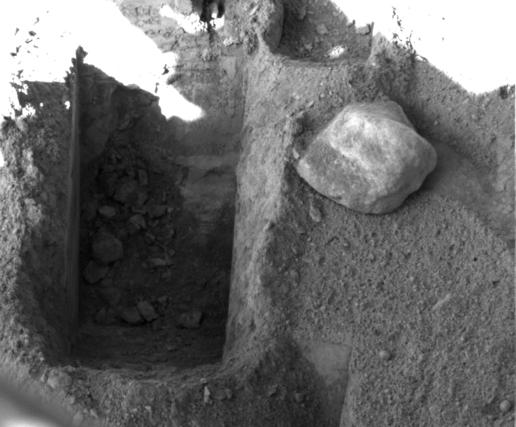 Digging by NASA's Phoenix Mars Lander on Aug. 23, 2008, during the 88th sol (Martian day) since landing, reached a depth about three times greater than in any trench Phoenix has excavated. The deep trench, informally called "Stone Soup" is at the borderline between two of the polygon-shaped hummocks that characterize the arctic plain where Phoenix landed.

The lander's Surface Stereo Imager took this picture of Stone Soup trench on Sol 88 after the day's digging. The trench is about 25 centimeters (10 inches) wide and about 18 centimeters (7 inches) deep.

When digging trenches near polygon centers, Phoenix has hit a layer of icy soil, as hard as concrete, about 5 centimeters or 2 inches beneath the ground surface. In the Stone Soup trench at a polygon margin, the digging has not yet hit an icy layer like that.

Stone Soup is toward the left, or west, end of the robotic arm's work area on the north side of the lander.