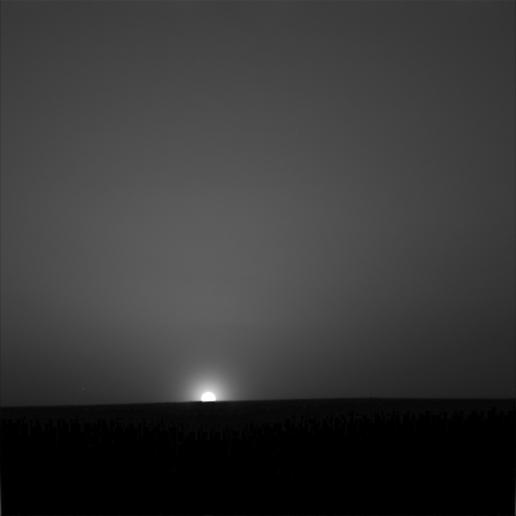 From the location of NASA's Phoenix Mars Lander, above the Martian arctic circle, the sun does not set during the peak of the Martian summer.

This period of maximum solar energy is past -- on Sol 86, the 86th Martian day after the Phoenix landing, the sun fully set behind a slight rise to the north for about half an hour.

This red-filter image taken by the lander's Surface Stereo Imager, shows the sun rising on the morning of sol 90, Aug. 25, 2008, the last day of the Phoenix nominal mission.

The image was taken at 51 minutes past midnight local solar time during the slow sunrise that followed a 75 minute "night." The skylight in the image is light scattered off atmospheric dust particles and ice crystals.

The setting sun does not mean the end of the mission. In late July, the Phoenix Mission was extended through September, rather than the 90-sol duration originally planned as the prime mission.

The mission is led by the University of Arizona, Tucson, on behalf of NASA. Project management of the mission is by NASA's Jet Propulsion Laboratory, Pasadena, Calif. Spacecraft development is by Lockheed Martin Space Systems, Denver.