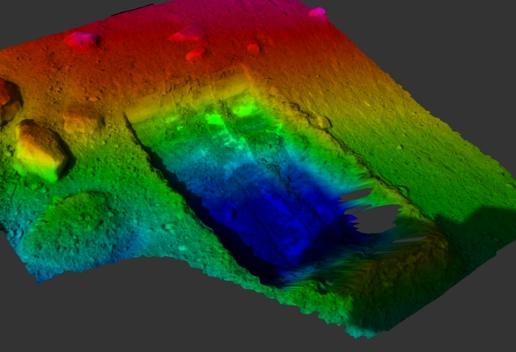 This color-coded elevation map shows the "Dodo-Goldilocks" trench dug by the Robotic Arm on NASA's Phoenix Mars Lander. The trench, originally two separate trenches nicknamed "Dodo" (left) and "Goldilocks" (right), became one after further digging on the 18th Martian day, or Sol 18, of the mission (June 12, 2008). The trench is 7 to 8 centimeters (2.7 to 3 inches) at its deepest (blue). Because the terrain itself is inclined at a 14-degree angle, the highest areas (pink) are about 20 centimeters (7.8 inches) above the lowest areas.

The trench is 22 centimeters (8.7 inches) wide and 35 centimeters (13.8 inches) long. Its deepest portion is closest to the lander.