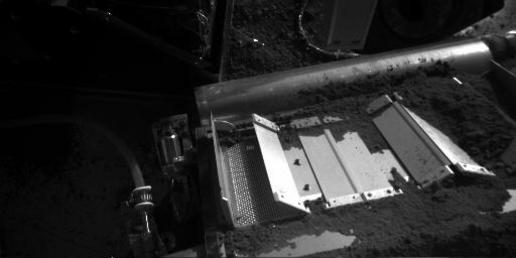 Soil from a sample called Burning Coals was delivered through the doors of cell number seven (left) of the Thermal and Evolved-Gas Analyzer on NASA's Phoenix Mars Lander on Aug. 20, 2008, during the 85th Martian day, or sol, since Phoenix landed.

This image from Phoenix's Robotic Arm Camera shows some of the soil on the screen beneath the doors. One of the cell's two doors is fully open, the other partially open.

This soil sample comes from an intermediate depth between the ground surface and the hard, underground icy layer at the Phoenix site.