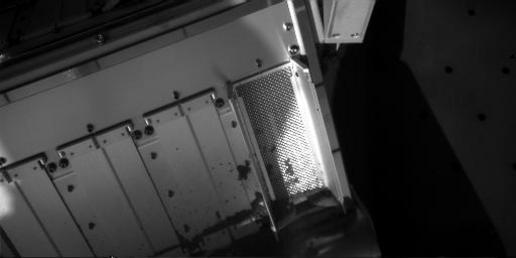 NASA's Phoenix Mars Lander collected a soil sample and attempted to deliver some of it to a laboratory oven on the deck during the mission's 62nd Martian day, or sol, (July 28, 2008). The sample came from a hard layer at the bottom of the "Snow White" trench and might have contained water ice mixed with the soil. This image taken after the attempt to deliver the sample through the open doors to cell number zero on the Thermal and Evolved-Gas Analyzer shows that very little of the soil fell onto the screened opening.

Not enough material reached the oven, through a funnel under the screen, to proceed with analysis of the sample material.

Phoenix's Robotic Arm Camera took this image at 7:54 a.m. local solar time on Sol 62. The size of the screened opening is about 10 centimeters (4 inches) long by 4 centimeters (1.5 inches) wide.