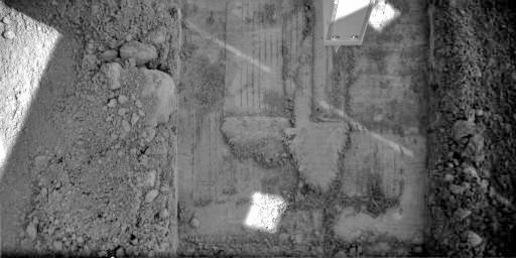 Snow White 5 is Phoenix's current active digging area after additional trenching, grooming, and scraping by Phoenix's Robotic Arm in the last few sols to trenches informally called Snow White 1, 2, 3, and 4. Near the top center of the image is the Robotic Arm's Thermal and Electrical Conductivity Probe.

Snow White 5 is located in a patch of Martian soil near the center of a polygonal surface feature, nicknamed "Cheshire Cat." The digging site has been named "Wonderland."

This image has been enhanced to brighten shaded areas.