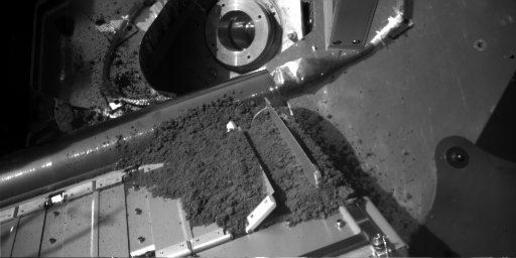 The Robotic Arm of NASA's Phoenix Mars Lander released a sample of Martian soil onto a screened opening of the lander's Thermal and Evolved-Gas Analyzer (TEGA) during the 12th Martian day, or sol, since landing (June 6, 2008). TEGA did not confirm that any of the sample had passed through the screen.

The Robotic Arm Camera took this image on Sol 12. Soil from the sample delivery is visible on the sloped surface of TEGA, which has a series of parallel doors. The two doors for the targeted cell of TEGA are the one positioned vertically, at far right, and the one partially open just to the left of that one. The soil between those two doors is resting on a screen designed to let fine particles through while keeping bigger ones from clogging the interior of the instrument. Each door is about 10 centimeters (4 inches) long.