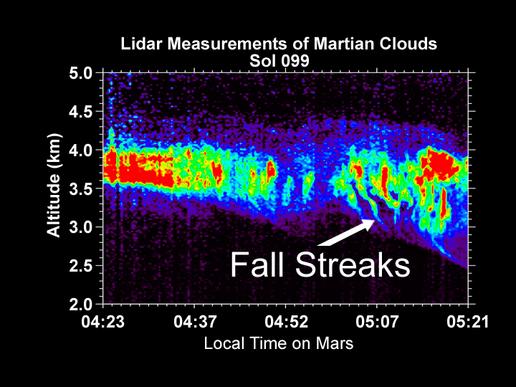 The Canadian-built lidar aboard NASA's Phoenix Mars Lander produced this graphic of a profile of a Martian cloud on the 99th sol, or Martian day, of the mission (Sept. 3, 2008). The vertical streaks at the base of the cloud on the right of the image show ice crystals falling from the cloud, similar to snow. The streaks are curved as the winds are faster around 3 kilometers (almost 2 miles) than at higher altitudes. Scientists are able to determine that the snow is water-based and not carbon-dioxide snow, since temperatures on Mars are currently too warm to support the latter.