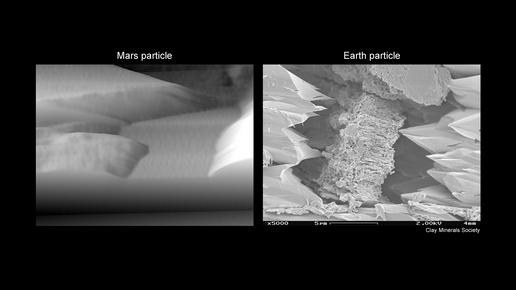 The image on the left is a particle of Martian soil observed with the atomic force microscope on NASA's Phoenix Mars Lander. For comparison, the image on the right is a type of terrestrial material viewed with a scanning electron microscope.

The Mars image covers an area approximately 10 microns wide. The smooth-surfaced, platy particle is consistent with the appearance of phyllosilicate soil. The Martian particle resembles the soil on the left and right perimeter of the terrestrial image.

The terrestrial image shows smectite microboxwork separated from denticulated pyroxene by large pore space. The particles are in a soil sample of saprolitized clinopyroxene from Koua Bocca, Ivory Coast, West Africa. This image's field of view is approximately 23 microns wide.

Earth image credit: Photo courtesy of Michael Velbel (Michigan State University) and William Barker, (University of Wisconsin-Madison). From the image database of the Clay Minerals Society and the Mineralogical Society of Great Britain and Ireland at http://www.minersoc.org/pages/gallery/claypix/index.html .