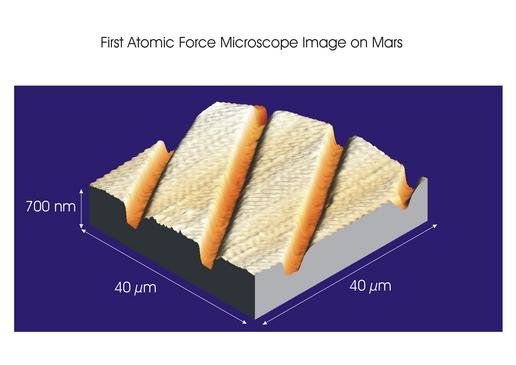 This calibration image presents three-dimensional data from the atomic force microscope on NASA's Phoenix Mars Lander, showing surface details of a substrate on the microscope station's sample wheel. It will be used as an aid for interpreting later images that will show shapes of minuscule Martian soil particles.

The area imaged by the microscope is 40 microns by 40 microns, small enough to fit on an eyelash. The grooves in this substrate are 14 microns (0.00055 inch) apart, from center to center. The vertical dimension is exaggerated in the image to make surface details more visible. The grooves are 300 nanometers (0.00001 inch) deep.

This is the first atomic force microscope image recorded on another planet. It was taken on July 9, 2008, during the 44th Martian day, or sol, of the Phoenix mission since landing.

Phoenix's Swiss-made atomic force microscope builds an image of the surface shape of a particle by sensing it with a sharp tip at the end of a spring, all microfabricated out of a silicon wafer. A strain gauge records how far the spring flexes to follow the contour of the surface. It can provide details of soil-particle shapes smaller than one-hundredth the width of a human hair. This is about 20 times smaller than what can be resolved with Phoenix's optical microscope, which has provided much higher-magnification imaging than anything seen on Mars previously. Both microscopes are part of Phoenix's Microscopy, Electrochemistry and Conductivity Analyzer.