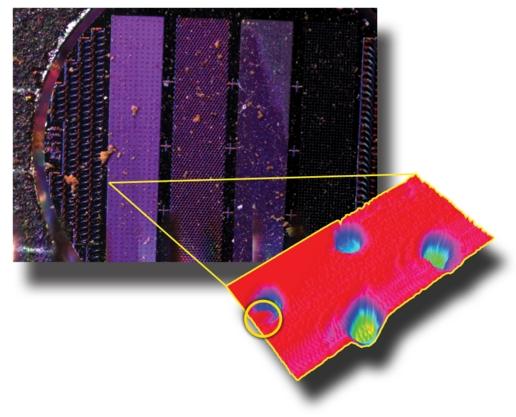 The image on the upper left is from NASA's Phoenix Mars Lander's Optical Microscope after a sample informally called "Sorceress" was delivered to its silicon substrate on the 38th Martian day, or sol, of the mission (July 2, 2008).

A 3D representation of the same sample is on the right, as seen by Phoenix's Atomic Force Microscope. This is 200 times greater magnification than the view from the Optical Microscope, and the most highly magnified image ever seen from another world.

The image shows four round pits, only 5 microns in depth, that were micromachined into the silicon substrate, which is the background plane shown in red. This image has been processed to reflect the levelness of the substrate.

A Martian particle -- only one micrometer, or one millionth of a meter, across -- is held in the upper left pit.

The rounded particle -- shown at the highest magnification ever seen from another world -- is a particle of the dust that cloaks Mars. Such dust particles color the Martian sky pink, feed storms that regularly envelop the planet and produce Mars' distinctive red soil.

The Optical Microscope and the Atomic Force Microscope are part of Phoenix's Microscopy, Electrochemistry and Conductivity Analyzer instrument.

The AFM was developed by a Swiss-led consortium, with Imperial College London producing the silicon substrate that holds sampled particles.