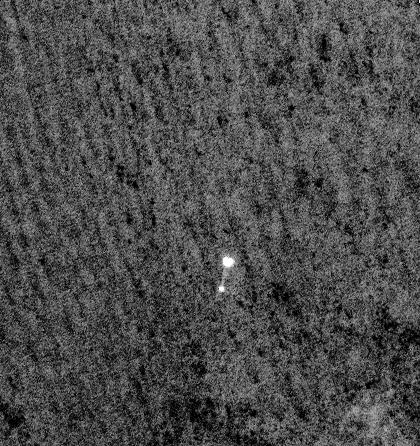 NASA's Phoenix Mars Lander can be seen parachuting down to Mars, in this image captured by the High Resolution Imaging Science Experiment (HiRISE) camera on NASA's Mars Reconnaissance Orbiter. This is the first time that a spacecraft has imaged the final descent of another spacecraft onto a planetary body.

From a distance of about 310 kilometers (193 miles) above the surface of Mars, Mars Reconnaissance Orbiter pointed its HiRISE camera obliquely toward Phoenix to capture this shot. Phoenix had just opened its parachute 46 seconds earlier, jettisoned its heat shield and was two minutes and 52 seconds away from landing on the Red Planet. The image reveals the parachute and a dangling Phoenix below. The cords attaching the spacecraft's back shell and parachute are faintly visible. The surroundings look dark, but correspond to the fully illuminated Martian surface, which is much darker than the parachute and back shell.

Phoenix released its parachute at an altitude of about 12.6 kilometers (7.8 miles).

The HiRISE, acquired this image on May 25, 2008, at 4:36 p.m. Pacific Time (7:36 p.m. Eastern Time). It is a highly oblique view of the Martian surface, 26 degrees above the horizon, or 64 degrees from the normal straight-down imaging of Mars Reconnaissance Orbiter. The image has a scale of 0.76 meters per pixel.

This image has been brightened to show the patterned surface of Mars in the background.