Habitability Versus Searching for Life -- the Phoenix Mission

I'm Dr. Deborah Bass, Deputy Project Scientist for Phoenix. I have been working to create operations processes and jobs and train the science team in how to carry out those jobs. In addition to that, I work very closely with the engineering team on Phoenix to make sure decisions are made that benefit science as much as possible!

Phoenix is not searching for life. That potential discovery is for a future mission that has specific life-detection instruments. But I keep getting asked about whether Phoenix will find life on Mars, so I've thought quite a bit about what Phoenix is and is not doing.

What Phoenix is planning to investigate is whether the arctic region on Mars could have supported life, either now or in the past. That is a search for "habitability." It is looking for the right environment and ingredients for life. Look at it this way. To even start making chocolate chip cookies, you have to be sure you have the flour, the eggs, the butter and the chocolate chips! They wouldn't be chocolate chip cookies without the chips, you know! That means Phoenix is investigating whether life could have been possible in the Martian Arctic. At any rate, the things necessary for life as we know it are an energy source, organic materials and liquid water. 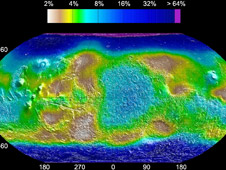 This is a map from Mars Odyssey showing water content in the very top of the Martian soil. Blue at the poles shows the soil is about 30 percent or more water.
›  Read more The energy source is easy -- sunlight for example, which plants on Earth use to convert carbon dioxide into oxygen. Obviously we know Mars has sunlight! Other Mars spacecraft have found evidence of molecules called sulfates. Sulfates happen to also be a good energy source -- organisms on Earth at the bottom of deep ocean trenches use sulfates for chemical energy sources. Phoenix will be looking for these sulfates at its landing site too.

Previous spacecraft have shown that water seems to have been all over Mars in the past in liquid form. Phoenix is going to study its landing site for evidence of water ice and whether that water ice ever thawed. It is that liquid water that is necessary for life. It is possible that life might still be around in some kind of frozen, dormant form. But remember that Phoenix is not going to try to detect those microbes; rather, it will look at whether they *could* have existed at some point. Click here to watch a video about 'Looking for Life in All the Right Places.'

Organic materials are molecules that contain the building blocks of Life -- carbon, oxygen, nitrogen, hydrogen. Mars doesn't appear to have organic materials on its surface, but it might be possible that there are organics preserved beneath the surface in the water ice. Turns out that ice is a good preserver of organic materials on Earth, which means that the Martian polar region is probably the best place to look for organics on Mars!

Habitability -- was Mars ever "just right" for life? That's what Phoenix is hoping to discover -- a complicated and important search, if I do say so.

To learn more about the spacecraft and the mission, check out the following sites:
www.nasa.gov/phoenix
http://phoenix.lpl.arizona.edu/
www.jpl.nasa.gov/news/phoenix/

Back to main blog page