The Poseidon-3 radar altimeter, provided by Centre National d'Etudes Spatiales (CNES), is the mission's main instrument. It accurately measures the distance between the satellite and the mean sea surface. Derived from the Poseidon-2 altimeter on Jason-1, it emits pulses at two frequencies (13.6 and 5.3 gigahertz) to the ocean surface and analyzes very precisely the time it takes for the signals to return.

The Advanced Microwave Radiometer (AMR), provided by NASA, is an advanced version of the microwave radiometer that flew on Jason-1. It measures radiation from Earth's surface at three frequencies (18, 21 and 37 gigahertz) to determine the amount of water vapor present in the atmosphere. This water vapor affects the accuracy of altimeter measurements by delaying the time it takes for the altimeter's signals to make their round trip to the ocean surface and back. 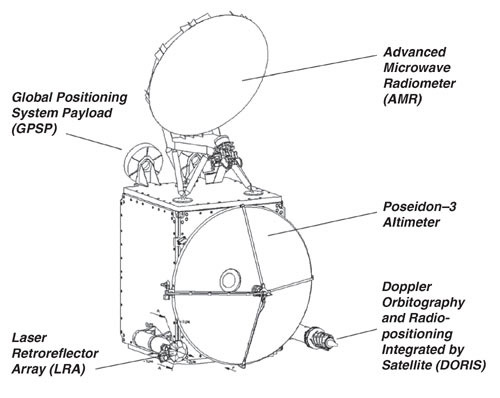 The Doppler Orbitography and Radio-positioning Integrated by Satellite (DORIS), provided by CNES, determines the satellite's precise position in orbit to within a few centimeters, information that is critical in interpreting altimetry data. It works by receiving signals in two frequencies from a ground network of 60 beacons all over the globe. The relative motion of the satellite generates a shift in signal frequency, called the Doppler shift, which is measured to determine the satellite's velocity and position.

The Global Positioning System Payload (GPSP), provided by NASA, is a tracking system that enhances DORIS measurements by using triangulated data from the U.S. Global Positioning System constellation of navigation satellites to determine the satellite's precise position in orbit. It is nearly identical to the Turbo Rogue Space Receiver on Jason-1. Its data are used to continuously track the satellite's trajectory.

The Laser Retroreflector Array (LRA), provided by NASA, is an array of mirrors that allow the satellite to be tracked with centimeter accuracy by 40 satellite laser ranging stations on the ground. By analyzing the round-trip time of the laser beam, the satellite's precise position in orbit can be determined. It is an exact copy of the LRA on Jason-1.

The Environment Characterization and Modelisation-2 (Carmen-2) instrument, provided by CNES, will study the effects of radiation in the satellite's environment on advanced components.

The Time Transfer by Laser Link (T2L2) instrument, provided by CNES, will use a laser link to compare and synchronize remote ground clocks with high accuracy.

The Light Particle Telescope (LPT), provided by Japan, will study radiation in the satellite's environment.In addition to their own scientific objectives, these passenger instruments are expected to improve the performance of DORIS.
›Back To Top