NASA Mission Poised to Help Us Gauge Our Rising Seas 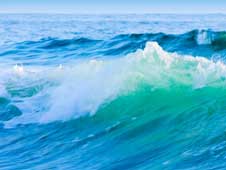 Ocean waves. In economics, there's a metaphor that says "a rising tide lifts all boats," meaning overall improvement in the economy benefits everyone. While that's a good thing in economics, when it comes to our oceans, rising seas are a growing problem for all of us.

Global sea level has risen 20 centimeters (eight inches) in the past 100 years, and the rate of rise is predicted to accelerate as Earth warms. Melting ice from Greenland and Antarctica could raise sea level more than one meter (three feet) over the next century. One obvious threat is inundation, or loss of land to rising water. Other consequences are more complex, but equally problematic--a warmer ocean can fuel more intense storms; environmental changes can adversely affect ocean life, such as coral reefs and fisheries; and alterations in ocean currents can trigger radical changes in Earth's climate.

The best hope for anticipating the future is to understand the past and present. For global sea level, the first step has been to measure it accurately, a challenge in itself. Records of global sea level in the past come from averaging tide gauge readings from many locations. But since the launch of Topex/Poseidon in 1992, followed by Jason-1 in 2001, scientists have had a precise measurement of the height of the global ocean every 10 days. Now the Ocean Surface Topography Mission/Jason-2, scheduled to launch June 20 from California's Vandenberg Air Force Base, will continue this critical task.

"Without this data record, we would have no basis for evaluating change," said the new mission's project scientist, Lee-Lueng Fu, of NASA's Jet Propulsion Laboratory, Pasadena, Calif. He compares the global sea level record started by Topex/Poseidon to the continuous measurements of atmospheric carbon dioxide begun in the 1950s at the Mauna Loa Observatory in Hawaii. "The Mauna Loa data proved that carbon dioxide levels were indeed rising as had been predicted, and they were the basis for our understanding of the greenhouse effect," Fu said. "The height of the ocean is another fundamental measurement of our climate. The key is to have rigorous, well-calibrated data collected over a long period of time." 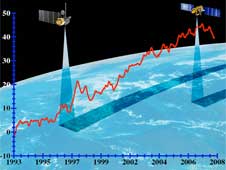 Global sea level has risen about 3 millimeters (0.1 inch) a year since Topex/Poseidon (on the left) began its precise measurement of sea surface height in 1993 and was followed by Jason-1 in 2001. In this graph, the vertical scale represents globally averaged sea level. Seasonal variations in sea level have been removed to show the underlying trend. Image credit: University of Colorado
Larger view Satellite measurements of sea-surface height do much more than document and quantify change. They're a primary tool for understanding how the change is occurring and what the results for the planet may be.

"Sea level is showing the profound consequences of global warming," said Fu. "More than 80 percent of the heat from global warming has been absorbed by the ocean with the rest of it warming the atmosphere, land and melting ice." Warming water and melting ice are the two major factors that contribute to global sea level rise. Warm water expands and takes up more space than cold water. Melting glaciers and ice sheets add fresh water to the ocean, increasing its volume. "To predict what is going to happen in the future, you have to be able to separate the different contributors," Fu said.

Satellite altimeter instruments that measure the precise height of the ocean surface are one of three key ocean-observing systems being used in combination to identify the individual sources of sea-level change. The other two are the gravity-sensing twin Gravity Recovery and Climate Experiment (Grace) satellites and a global array of Argo floats operated by the National Oceanic and Atmospheric Administration, commonly known as NOAA.

"The altimeter measures the total sea level, which includes any changes due to heating or cooling, water coming in or going out and seasonal changes," explained Don Chambers, a research scientist at the University of Texas's Center for Space Research in Austin.

"The Grace satellites sense changes in mass, the result of water added to the ocean by melting glaciers or ice sheets, precipitation and rivers, or removed through evaporation."

Subtract the change in sea level due to mass, measured by Grace, from the total sea level measured by Jason-1--and soon by OSTM/Jason-2--and the answer should reveal just how much of the change is due to heat, or thermal expansion.

For a closer look at ocean heat, scientists turn to temperature and other measurements made by the thousands of Argo floats. "The Argo profilers give us a good representation of the upper 1,000 meters (3,281 feet) of the ocean," Chambers said. "And since altimeters and Grace measure the total ocean, using what we know about the upper ocean from Argo gives us an idea about what's going on below in the deep ocean, about which we have little data."

"We know the basics of sea level rise very well," said JPL oceanographer and climate scientist Josh Willis. But several critical elements still need to be resolved, he stressed. "Everything doesn’t quite add up yet."

For example, in a recent study, Willis, Chambers and their colleague Steven Nerem of the Colorado Center for Astrodynamics Research in Boulder, compared the amount of ocean warming during 2003 to 2007 observed by the Argo buoys with the amount of warming calculated by combining Grace and Jason-1 altimeter data. While the two measurements closely matched with regard to seasonal ups and downs, they didn't agree at all on the total amount of warming. In fact, the Argo data showed no warming at all, while the combined Jason and Grace data did.

This is a mystery to the scientists, which they hope to resolve soon. Willis added there is no observing system yet for the deep ocean, and it could hold some real surprises.

The record of sea-surface height begun by Topex/Poseidon is now 16 years old. As the record grows longer with the continued health of Jason-1 and the launch of OSTM/Jason-2, some uncertainties about sea level rise are much closer to resolution.

"We are getting a better understanding of our measurement systems and just how much we can trust our numbers," said Fu. "We know that sea level is not rising everywhere at the same pace, and we are learning more every year about the natural variability in the ocean over short and long periods. We are learning more about the exchange of heat between the ocean and the atmosphere, the driving force of our climate."

So will we have disastrous sea-level rise? If so, when?

We don’t know yet, said Fu, but he does not rule out finding the answer.