On the 3,340th day since it’s arrival at Mars, NASA’s Odyssey orbiter became the longest operating spacecraft at the Red Planet. › Download video 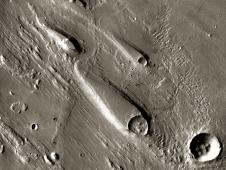 
PASADENA, Calif., -- NASA's Mars Odyssey, which launched in 2001, will break the record Wednesday for longest-serving spacecraft at the Red Planet. The probe begins its 3,340th day in Martian orbit at 5:55 p.m. PST (8:55 p.m. EST) on Wednesday to break the record set by NASA's Mars Global Surveyor, which orbited Mars from 1997 to 2006.

Odyssey's longevity enables continued science, including the monitoring of seasonal changes on Mars from year to year and the most detailed maps ever made of most of the planet. In 2002, the spacecraft detected hydrogen just below the surface throughout Mars' high-latitude regions. The deduction that the hydrogen is in frozen water prompted NASA's Phoenix Mars Lander mission, which confirmed the theory in 2008. Odyssey also carried the first experiment sent to Mars specifically to prepare for human missions, and found radiation levels around the planet from solar flares and cosmic rays are two to three times higher than around Earth.

Odyssey also has served as a communication relay, handling most of the data sent home by Phoenix and NASA's Mars Exploration Rovers Spirit and Opportunity. Odyssey became the middle link for continuous observation of Martian weather by NASA's Mars Global Surveyor and NASA's Mars Reconnaissance Orbiter.

"Odyssey has proved itself to be a great spacecraft, but what really enables a spacecraft to reach this sort of accomplishment is the people behind it," said Gaylon McSmith, Odyssey project manager at NASA's Jet Propulsion Laboratory in Pasadena, Calif. "This is a tribute to the whole Odyssey team."

Odyssey will support the 2012 landing of the Mars Science Laboratory and surface operations of that mission. Mars Science Laboratory, also known as the Curiosity rover, will assess whether its landing area has had environmental conditions favorable for microbial life and preserving evidence about whether life has existed there. The rover will carry the largest, most advanced set of instruments for scientific studies ever sent to the Martian surface.

Other recent NASA spacecraft at Mars include the Mars Global Surveyor that began orbiting the Red Planet in 1997. The Spirit and Opportunity rovers landed on Mars in January 2004. They have been exploring for six years, far surpassing their original 90-day mission. Phoenix landed May 25, 2008, farther north than any previous spacecraft to the planet's surface. The mission's biggest surprise was the discovery of perchlorate, an oxidizing chemical on Earth that is food for some microbes, but potentially toxic for others. The solar-powered lander completed its three-month mission and kept working until sunlight waned two months later. MRO arrived at Mars in 2006 on a search for evidence that water persisted on the planet's surface for a long period of time.

Odyssey is managed by JPL for NASA's Science Mission Directorate in Washington. Lockheed Martin Space Systems in Denver built the spacecraft. JPL and Lockheed Martin collaborate on operating the spacecraft. For more about the Mars Odyssey mission, visit: http://mars.jpl.nasa.gov/odyssey. JPL is a division of the California Institute of Technology in Pasadena.