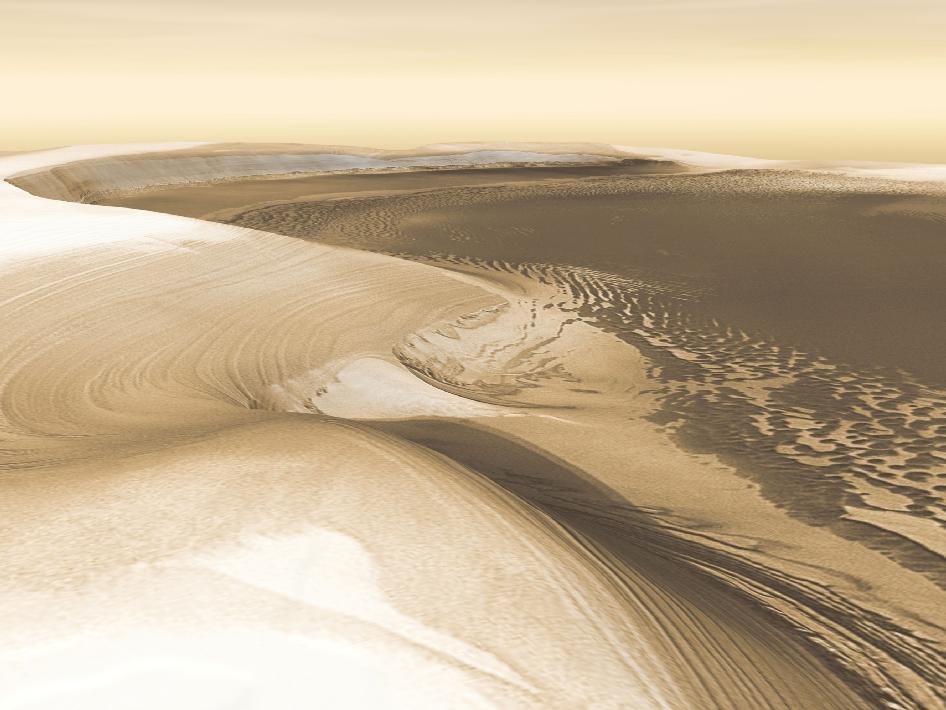 Chasma Boreale is a long, flat-floored valley that cuts deep into Mars' north polar icecap. Its walls rise about 1,400 meters (4,600 feet) above the floor. Where the edge of the ice cap has retreated, sheets of sand are emerging that accumulated during earlier ice-free climatic cycles. Winds blowing off the ice have pushed loose sand into dunes and driven them down-canyon in a westward direction, toward our viewpoint.

This scene combines images taken during the period from December 2002 to February 2005 by the Thermal Emission Imaging System instrument on NASA's Mars Odyssey orbiter. It is part of a special set of images marking the occasion of Odyssey becoming the longest-working Mars spacecraft in history. The pictured location on Mars is 84.9 degrees north latitude, 359.1 degrees east longitude.

NASA's Jet Propulsion Laboratory manages the 2001 Mars Odyssey mission for NASA's Science Mission Directorate, Washington, D.C. The Thermal Emission Imaging System (THEMIS) was developed by Arizona State University, Tempe, in collaboration with Raytheon Santa Barbara Remote Sensing. The THEMIS investigation is led by Dr. Philip Christensen at Arizona State University. Lockheed Martin Astronautics, Denver, is the prime contractor for the Odyssey project, and developed and built the orbiter. Mission operations are conducted jointly from Lockheed Martin and from JPL, a division of the California Institute of Technology in Pasadena.