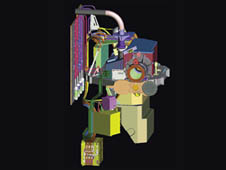 Diagram of instrument on NASA's Orbiting Carbon Observatory.
Larger view
The Orbiting Carbon Observatory's single science instrument consists of three parallel, high-resolution spectrometers, integrated into a common structure and fed by a common telescope. The spectrometers will make simultaneous measurements of the carbon dioxide and molecular oxygen absorption of sunlight reflected off the same location on Earth's surface when viewed in the near-infrared part of the electromagnetic spectrum, invisible to the human eye.

As sunlight passes through Earth's atmosphere and is reflected from Earth's surface, molecules of atmospheric gases absorb very specific colors of light. If the light is divided into a rainbow of colors, called a "spectrum," the specific colors absorbed by each gas appear as dark lines. Different gases absorb different colors, so the pattern of absorption lines provides a telltale spectral "fingerprint" for that molecule. The Orbiting Carbon Observatory's spectrometers have been designed to detect these molecular fingerprints.

Each of the three spectrometers is tuned to measure the absorption in a specific range of colors. Each of these ranges includes dozens of dark absorption lines produced by either carbon dioxide or molecular oxygen. The amount of light absorbed in each spectral line increases with the number of molecules along the optical path. The Orbiting Carbon Observatory spectrometers measure the fraction of the light absorbed in each of these lines with very high precision. This information is then analyzed to determine the number of molecules along the path between the top of the atmosphere and the surface.

If the amount of carbon dioxide varies from place to place, the amount of absorption will also vary. To resolve these variations, the Orbiting Carbon Observatory's instrument records an image of the spectrum produced by each spectrometer three times every second as the satellite flies over the surface at more than four miles per second. This information is then transmitted to the ground, where carbon dioxide concentrations are retrieved in four separate footprints for each image collected. These spatially varying carbon dioxide concentration estimates are then analyzed using global transport models, like those used for weather prediction, to infer the locations of carbon dioxide sources and sinks.

The instrument views Earth through a telescope mounted in the side of the spacecraft. Reflected sunlight is first focused at a field stop (a rectangular aperture at the focus of the telescope that limits the field of view) and then realigned before entering a transfer optics assembly that ensures all three spectrometer channels view the same scene. A beam splitter selects specific ranges of colors of light to be analyzed by each spectrometer, which is then refocused on a narrow slit that forms the entrance to each spectrometer.

Once light passes through the spectrometer slits, it is aligned, and then divided into its component colors by a diffraction grating. This is similar to the way light shined through a prism creates a rainbow.

The light is then refocused by a camera lens onto each spectrometer's focal plane array--image sensing devices designed to detect very fine differences in the intensity of the light within its spectrometer's spectral range. There, it forms a two-dimensional image of a spectrum and is recorded.

The observatory will continuously collect 12 soundings per second while over Earth's sunlit hemisphere. At this rate, the instrument will gather between 33,500 and 35,500 individual measurements over a narrow ground track each orbit. The surface footprint of each measurement is about 1 square mile (just under 3 square kilometers). Over the course of each 16-day ground repeat cycle, it will collect about 8,000,000 measurements, with orbit tracks separated by less than 1.5 degrees longitude (100 miles or 170 kilometers) at the equator. With measurement footprints of this size and density, the instrument can make an adequate number of high-quality soundings, even in regions with clouds, aerosols and variations in topography.

To enhance the quality and verify the validity of mission data, the observatory will collect science observations in three standard observational modes: nadir, glint and target.

In nadir mode, the satellite points the instrument straight down to the ground. This mode provides the highest spatial resolution on the surface and is expected to return more usable soundings in regions that are partially cloudy or have significant surface topography. Nadir observations may not be suitable over dark ocean surfaces or in areas covered by snow.

In glint mode, the spacecraft points the instrument at the spot on Earth's surface where the sun's reflection is most intense. Glint mode provides up to 100 times more signal than nadir mode, improving observations over dark ocean surfaces.

Target-tracking mode is used primarily for validating the observatory data against ground calibration sites. The observatory locks its view onto a single specific surface location while it flies overhead.

The mission plans to alternate between nadir and glint modes over each sequential 16-day global ground track repeat cycle, so the entire Earth is mapped in each mode on roughly monthly time scales. Up to one target observation can be taken each day to validate the data.
›Back To Top