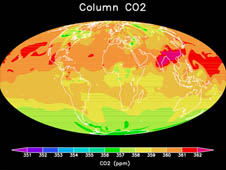 The Orbiting Carbon Observatory will map the sources and storage places of carbon dioxide and study their changes over time. Image credit: CSU
Larger view
Podcast: The Space Hunt Is On -- for Carbon Dioxide As the concentration of heat-trapping carbon dioxide in Earth's atmosphere continues to rise, so also does public awareness, as well as efforts to find solutions to this global problem. Increasing concentrations of this potent greenhouse gas threaten to alter Earth's climate in ways that will have profound impacts on the welfare and productivity of society and Earth's ecosystems.

Comparisons of these data with carbon dioxide emission rates from fossil fuel combustion, biomass burning and other human activities tell us that only about half of the carbon dioxide released into the atmosphere during this period has remained there. The rest has apparently been absorbed by surface "sinks" in the land biosphere or oceans. These measurements also show that, despite the steady long-term growth of carbon dioxide in the atmosphere, the buildup varies dramatically from year to year, even though emissions have increased smoothly. However, the ground-based carbon dioxide monitoring network is too sparse to identify the locations of these sinks or tell us what controls changes in their efficiency from year to year.

NASA's new Orbiting Carbon Observatory is designed to help meet this need. It will measure the amount of carbon dioxide in the atmosphere over any spot on Earth's surface and establish a record of how carbon dioxide concentrations change over time. Observations from the mission will improve our understanding of the carbon cycle—the movement of carbon among its "reservoirs" in the Earth system--and help us understand the influence of the carbon cycle on climate.

The observatory's ability to locate and monitor changes in carbon sources (places where carbon is generated) and sinks (places where carbon is absorbed or stored) will provide valuable information to support decision making by those responsible for managing carbon in the environment. It will assist them in developing effective strategies for managing global carbon dioxide and monitoring the effectiveness of those strategies.

Phil DeCola, a senior policy analyst in the White House Office of Science and Technology Policy, and former Orbiting Carbon Observatory program scientist at NASA Headquarters in Washington, said solving the scientific mystery of the missing sinks and their curious variability is likely to have large policy and economic impacts.

"If the nations of the world take serious action to limit the use of fossil fuels, the right to emit carbon dioxide will become scarcer, and emission rights would become an increasingly valuable traded commodity," DeCola said. "Observations of the location, amount and rate of carbon dioxide emission into the air, as well as the stock and flow of all forms of carbon on land and in the ocean, will be needed to manage such a world market fairly and efficiently."

Two commonly discussed strategies for reducing the amount of atmospheric carbon dioxide are a carbon tax and a "cap-and-trade" system. A carbon tax is a fee imposed on activities, such as burning of fossil fuels, which emit carbon compounds into the atmosphere. The carbon tax reduces carbon emissions by encouraging efficiencies of use, or by alternative, non-carbon emitting processes.

Cap-and-trade systems establish limits on the carbon emissions that a company, industry or country is allowed to produce. Those who exceed their established limits must compensate by either purchasing emissions rights from those whose carbon dioxide emissions fall below their established limits, or by arranging, through contracts, for sequestration (i.e., storage) of their excess emissions in plants, soils or beneath Earth's surface. Effective use of either strategy requires more accurate information on the existing sources, sinks and fluxes of carbon dioxide, information that the Orbiting Carbon Observatory can help provide.

"The new mission will provide information to help develop and implement domestic policies and international collaborations to control the movement of carbon in the environment," said Edwin Sheffner, deputy chief of Earth Science at NASA's Ames Research Center, Moffett Field, Calif. "By identifying and monitoring carbon sources and sinks within a given region, the Orbiting Carbon Observatory will enable comparisons of net carbon dioxide emission sources among regions and counties, and will improve annual reporting of carbon budgets by industrial countries in northern latitudes, and by tropical states with large forests."

"Future monitoring systems based on Orbiting Carbon Observatory technology could report on regional carbon sources and sinks to verify carbon reporting for many countries as well," he added.

Use of Orbiting Carbon Observatory data in ecosystem models may reduce uncertainties about carbon uptake, a required part of any carbon management effort. The mission will help clarify the quantity of carbon dioxide being removed from the atmosphere in different geographic regions. For example, more carbon appears to be taken up by coastal and terrestrial ecosystems in North America than in many other parts of the world. Orbiting Carbon Observatory observations will help determine the specific roles that Alaska, Canada, the contiguous United States and Mexico play in this North American carbon sink. Understanding the relative roles of different regions will help policymakers develop the most efficient carbon dioxide sequestration and reduction policies.

The observatory's measurements may also have direct applications for a variety of current efforts to reduce carbon dioxide in the atmosphere. While the mission will not be able to identify small, individual sources of carbon dioxide emissions, it will likely be able to detect high-emission events such as gas flares, where unwanted gas or other materials are burned in large quantities. This ability could allow it to verify adherence to policies aimed at reducing such flares.

Orbiting Carbon Observatory data will also have implications for land management and agricultural practices. Plants take carbon dioxide out of the atmosphere as they grow--a natural type of carbon sequestration. By repeating its measurements over multiple seasons and over regions with different types of vegetation, such as cornfields or grasslands, the observatory will help identify how changes in land use affect the amount of carbon being sequestered.

Agencies such as the U.S. Department of Agriculture may base policies for crop production and land conservation, in part, on information from Orbiting Carbon Observatory observations, according to Sheffner. Similar observations can be used by the Department of Energy to help evaluate the carbon-capture potential of various biofuels and to assess their impacts on the environment and the carbon cycle. "These findings will influence both near- and long-term policy decisions related to alternative energy," Sheffner added. In regions with large-scale agricultural land cover, Orbiting Carbon Observatory-type observations over several growing seasons could help quantify the relative roles of different types of crops and assess the effectiveness of rangeland management strategies in statewide carbon budget management.

Orbiting Carbon Observatory data may also prove to be an important addition to the ongoing effort by the California Air Resources Board and NASA scientists to improve California's database on fluctuations in greenhouse gas emissions. "These state figures, when used to enhance NASA ecosystem carbon models, can increase our precision and confidence in the allocation of industrial sources of carbon dioxide emissions as compared to emissions caused by terrestrial events such as wildfires or crop production," Sheffner said.

Evaluation of the ocean, which takes up about one third of the carbon humans put into the atmosphere, and its role in the global carbon cycle, will also benefit from the new mission's observations. Orbiting Carbon Observatory data may help show how large-scale ocean events, such as El Niño or La Niña, affect carbon storage in the deep ocean and in coastal regions. They may also help verify the impacts of these events on carbon storage on the continents, such as reduced plant growth during an El Niño-influenced drought in the U.S. Southwest.

"As the ocean absorbs large amounts of carbon dioxide, seawater becomes more acidic, potentially threatening marine life. By monitoring changes in the ocean's carbon uptake, the mission may shed new light on ocean acidification and the resulting changes in ocean ecosystems," said Sheffner. Knowing more about how ocean carbon levels fluctuate will also help scientists evaluate the possibility of using biological or chemical processes in the ocean to sequester carbon and perhaps even mitigate ocean acidification.

Sheffner explained that the Orbiting Carbon Observatory may also aid efforts to find effective ways to store excess carbon safely underground. Combining mission data with observations from airborne and ground-based instruments will create much more accurate maps of global carbon sources and sinks than were ever possible before. "Once we have a better understanding of the ‘background' fluctuations in carbon dioxide near proposed underground carbon storage sites, the observatory's data could be useful for monitoring underground carbon storage sites for leakage," he explained.

"The Orbiting Carbon Observatory will provide information needed for evaluating policy options and monitoring the effectiveness of efforts to reduce carbon emissions and increase carbon sequestration locally, regionally and globally," Sheffner said, in summing up.

Looking to the future, DeCola said the mission will serve as a prototype for the next generation of greenhouse gas space missions. "The Orbiting Carbon Observatory will be an important experiment because its results will be used to develop the future long-term, space-based missions needed to monitor carbon dioxide for science and decision support," he said.