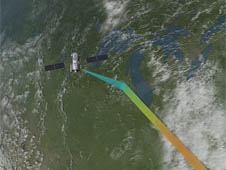 For Orbiting Carbon Observatory Principal Investigator David Crisp of NASA's Jet Propulsion Laboratory, Pasadena, Calif., and his team, the logical solution was an Earth-orbiting spacecraft. But shopping for a science instrument that could accomplish these objectives was no easy task.

In this case, "shopping" meant finding the right technology to meet the mission's demanding requirements. The observatory contains a custom-built instrument designed to make what Deputy Principal Investigator Charles Miller of JPL calls "the most difficult atmospheric trace-gas measurement that's ever been made from space." To put that measurement challenge into perspective, consider that all of Earth's trace gases combined, including carbon dioxide, make up less than one percent of Earth's atmosphere. In addition, carbon dioxide levels vary by only about two percent from pole to pole. To substantially increase our understanding of how carbon dioxide sources (places where carbon dioxide is emitted) and sinks (places where it is absorbed, or stored) are geographically distributed on regional scales and study how their distribution changes over time, the new mission needed to be able to resolve differences in atmospheric carbon dioxide as small as 0.3 percent on regional scales every month.

While one spaceborne instrument is already making carbon dioxide measurements from space-the Atmospheric Infrared Sounder on NASA's Aqua satellite-it sees the gas high up in the atmosphere, not near the surface, where it is emitted and where some of it is absorbed into land systems and the ocean. An instrument designed from the start to measure carbon dioxide down to Earth's surface was clearly needed.

Enter NASA's team of experts in atmospheric science, remote sensing instrumentation and the optical properties of the atmosphere's components.

The principle behind the observatory's measurement is relatively simple. Carbon dioxide, like all molecules, has an affinity for certain colors, or wavelengths, of light that have exactly the right energy to make the molecule vibrate or rotate at specific frequencies. A good analogy would be how a radio broadcasts sounds when it is tuned to a specific channel. So, if you could shine a light through Earth's atmosphere and see how the different colors that are sensitive to carbon dioxide respond, you could use that information to calculate how much carbon dioxide is present. Do this precisely enough and often enough and it would be possible to see changes in carbon dioxide levels over time-the key to identifying carbon dioxide sources and sinks.

The observatory uses the sun as its light source. To measure changes in sunlight as it passes through the atmosphere, its instrument incorporates a trio of high-resolution grating spectrometers, which divide light from the sun into a very fine rainbow of colors called a spectrum. They are known as grating spectrometers because they use a grate, or grid, to partition light into different wavelengths.

"You can see a good example of how a grating spectrometer works by looking at the back of a compact disc illuminated by a bright light," said Crisp. "The narrow circular tracks that record the information on the disk are very effective at splitting light into different colors."

As the Orbiting Carbon Observatory satellite circles the globe, the telescope on its instrument captures sunlight reflected by the surface below-light that has traveled from the sun, down through Earth's atmosphere and back up again to space. It sends the light to the three spectrometers, each of which looks at a different range of colors and breaks that spectral range down even further into more than 1,000 discrete colors. Two of the three spectral ranges that the spectrometers target are sensitive to carbon dioxide, and one responds to molecular oxygen.

Three separate digital detectors, one for each spectrometer, record a spectrum three times each second as the observatory flies above Earth's surface. Fast exposures are essential because the spacecraft moves at more than four miles per second along its orbit track. "We don't want long exposures that could include clouds as well as clear sky within individual exposures," says Crisp. "We also want to take the data fast and get more clear views to the surface."

While similar to the digital detectors in an ordinary camera, the observatory's detectors take advantage of advances from the world of astronomy to achieve the greatest possible sensitivity. "These detectors were originally developed to measure objects that are faint, fuzzy and far-away," said Crisp. "Here, we use them to measure very fine details in the spectrum of sunlight reflected from Earth."

The three spectral ranges measured by the observatory's spectrometers are in the near-infrared part of the electromagnetic spectrum, invisible to the human eye. Each provides a critical piece of information. One provides precise information about changes in the amount of carbon dioxide present in the atmosphere, while the others show just how much of the atmosphere is being measured. "We need all three of these measurements to do the job," said Crisp.

The second spectral range absorbs carbon dioxide much more strongly, so much so that almost all of the light in this part of the spectrum is absorbed completely as it traverses the atmosphere. Adding more carbon dioxide produces little additional absorption, so this wavelength is less useful for showing changes in carbon dioxide amounts. However, it does provide needed information about the pathway the light has taken. It helps determine whether the observatory is looking at light coming up all the way from the surface, or if clouds or aerosols, such as particles of smog or smoke, have gotten in the way and reflected the light back to space before it can be absorbed by carbon dioxide.

The third spectral range shows how much oxygen is present in the light's pathway, another way to determine how much atmosphere the light has passed through.

"Oxygen makes up about 21 percent of the atmosphere," explained Crisp. "Because we know the concentration, we know how much sunlight it should absorb over any particular surface elevation. If the sunlight penetrates all the way to sea level before it is reflected back to the spacecraft, it will produce more absorption than if it penetrates only to the top of a mountain or to the top of a cloud before it is reflected to space. We can even use measurements of the oxygen absorption to infer the surface pressure differences associated with elevation changes as small as 100 feet. We can also detect scattering by very thin clouds or hazes that reflect less than one percent of light back to space. These precise measurements of the atmospheric optical path are essential for accurate carbon dioxide measurements."

The high-resolution grating spectrometers and the digital detectors make it possible to make these measurements from a space-based instrument, according to Crisp.

Another technological challenge for the mission was designing the instrument to meet the strict size and energy requirements of an Earth-orbiting spacecraft.

"One of the most challenging aspects of the mission was not inventing components, but fitting a big instrument into a small spacecraft about the size of a phone booth and designing it to use very little power," said JPL's Randy Pollock, the mission's instrument systems engineer. The observatory's instrument uses only about 100 watts of electricity, while the entire spacecraft uses only 400-500 watts, about half the amount used by most microwave ovens.

Once received back on Earth, the observatory's data will be analyzed to yield estimates of the carbon dioxide concentration over Earth's sunlit hemisphere at spatial resolutions as small as one square mile using complex mathematical algorithms. Scientists will then analyze these carbon dioxide estimates using global transport models similar to those used for weather prediction to quantify carbon dioxide sources and sinks.

"Carbon dioxide is the primary human-produced greenhouse gas and, therefore, the primary human-caused driver of global warming," said Crisp. "To estimate the rate of global warming, we have to understand the processes controlling the buildup of carbon dioxide in Earth's atmosphere. Global, space-based monitoring systems like the Orbiting Carbon Observatory are essential tools for this task. The technology we validate on this mission will be used to develop future carbon dioxide monitoring missions."