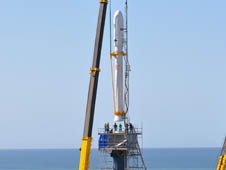 NASA's Orbiting Carbon Observatory is on the launch pad at Vandenberg Air Force Base in California. Image credit: NASA/Randy Beaudoin
High-resolution image Here are some quick facts about the Earth-orbiting satellite, scheduled to launch on Feb. 24, 2009.

-- It will study carbon dioxide sources (where it comes from) and sinks (where it is pulled out of the atmosphere and stored). Carbon dioxide is a major contributor to global warming. The new data will help scientists more accurately forecast global climate change.

-- Data collected by the OCO mission may help policymakers and leaders make more informed decisions to ensure climate stability and retain our quality of life.

-- Scientists don't know why the amount of carbon dioxide absorbed by Earth's natural ocean and land "sinks" varies dramatically from year to year. These sinks help limit global warming. The Orbiting Carbon Observatory will help scientists better understand what causes this variability and whether natural absorption will continue, stop or even reverse.

-- Data collected by OCO will help solve the mystery of "missing" carbon--the 30 percent of human-produced carbon dioxide that disappears into unknown places.

-- The Orbiting Carbon Observatory will yield 8-million carbon dioxide measurements every 16 days. That's a dramatic increase over current data available from today's small network of instruments on the ground, on tall towers and in aircraft, and from limited space observations. Media contact: Alan Buis/JPL
818-354-0474
› Back To Top