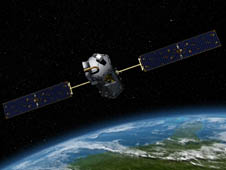 This is an artist’s concept of the Orbiting Carbon Observatory. Image credit: NASA

The Orbiting Carbon Observatory will provide the first complete picture of human and natural carbon dioxide sources as well as their "sinks," the places where carbon dioxide is pulled out of the atmosphere and stored.  It will map the global geographic distribution of these sources and sinks and study their changes over time.  The measurements will be combined with data from ground stations, aircraft and other satellites to help answer questions about the processes that regulate atmospheric carbon dioxide and its role in Earth's climate and carbon cycle.

"It's critical that we understand the processes controlling carbon dioxide in our atmosphere today so we can predict how fast it will build up in the future and how quickly we'll have to adapt to climate change caused by carbon dioxide buildup," said David Crisp, principal investigator for the Orbiting Carbon Observatory at NASA's Jet Propulsion Laboratory in Pasadena, Calif.

"The Orbiting Carbon Observatory's carbon dioxide measurements will be pivotal in advancing our knowledge of virtually all Earth system land, atmosphere, and ocean processes," said Michael Freilich, director of NASA's Earth Science Division in Washington. "They will play crucial roles in refining our knowledge of climate forcings and Earth's response processes."

The concentration of carbon dioxide in the atmosphere is determined by the balance between its sources and the sinks where it is absorbed on land and in the ocean. Human activities, particularly fossil fuel burning and deforestation, have upset Earth's carbon cycle balance. Since the Industrial Revolution began in 1750, atmospheric carbon dioxide has increased from about 280 parts per million to about 385 parts per million.  Climate models indicate increased greenhouse gases have been the primary driver of Earth's increasing surface temperature.

Of all the carbon humans have added to Earth's atmosphere since the start of the Industrial Revolution, only about 40 percent has remained in Earth's atmosphere.  About half of the remaining 60 percent can be accounted for in Earth's ocean. The rest must have been absorbed somewhere on land, but scientists cannot yet determine specifically where this is taking place or what controls the efficiency of these land sinks. Scientists refer to this as the "missing" carbon sink.

The new observatory will dramatically improve global carbon dioxide measurements, collecting about 8 million measurements every 16 days for at least two years with the precision, resolution and coverage needed to characterize carbon dioxide's global distribution.  Scientists need these precise measurements because carbon dioxide varies by just 10 parts per million throughout the year on regional to continental scales.

The Orbiting Carbon Observatory's three high-resolution spectrometers spread reflected sunlight into its various colors like a prism. Each spectrometer focuses on a different, narrow color range, detecting light with the specific colors absorbed by carbon dioxide and molecular oxygen. The less carbon dioxide present in the atmosphere, the more light the spectrometers detect. By analyzing the amount of light, scientists can determine relative concentrations of these chemicals. The data will then be input into computer models of the global atmosphere to quantify carbon dioxide sources and sinks.

The Orbiting Carbon Observatory will be launched on a Taurus XL rocket into a 438-mile near-polar orbit.  It will lead five other NASA satellites that cross the equator each day shortly after noon, making a wide range of nearly simultaneous Earth observations.

For more information about the Orbiting Carbon Observatory, visit: http://www.nasa.gov/oco .