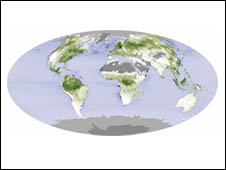 The Orbiting Carbon Observatory will regularly map carbon dioxide "sinks"-- places where carbon dioxide is pulled out of the atmosphere and stored, such as the carbon stored by plants during photosynthesis. Image credit: NASA Picture a tree in the forest. The tree "inhales" carbon dioxide from the atmosphere, transforming that greenhouse gas into the building materials and energy it needs to grow its branches and leaves.

By removing carbon dioxide from the atmosphere, the tree serves as an indispensable "sink," or warehouse, for carbon that, in tandem with Earth's other trees, plants and the ocean, helps reduce rising levels of carbon dioxide in the air that contribute to global warming.

Each year, humans release more than 30-billion tons of carbon dioxide into the atmosphere through the burning of fossil fuels for powering vehicles, generating electricity and manufacturing products. Up to five-and-a-half additional gigatons of carbon dioxide are released each year by biomass burning, forest fires and land-use practices such as slash-and-burn agriculture. Between 40 and 50 percent of that amount remains in the atmosphere, according to measurements by about 100 ground-based carbon dioxide monitoring stations scattered across the globe. Another estimated 30 percent is dissolved into the ocean, the world's largest sink.

But what about the rest? The math doesn't add up. For years, scientists have sought to find the answer to this mystery. Though scientists agree the remaining carbon dioxide is also "inhaled" by Earth, they have been unable to precisely determine where it is going, what processes are involved, and whether Earth will continue to absorb it in the future. A new NASA satellite scheduled to launch in February 2009 is poised to shed a very bright light on these "missing" sinks: the Orbiting Carbon Observatory.

"It's important to make clear that the ‘missing' sinks aren't really missing, they are just poorly understood," said Scott Denning, a professor of atmospheric sciences at Colorado State University in Fort Collins, Colo. "We know the ‘missing' sinks are terrestrial, land areas where forests, grasslands, crops and soil are absorbing carbon dioxide. But finding these sinks is like finding a needle in a haystack. It would be great if we could measure how much carbon every tree, shrub, peat bog or blade of grass takes in, but the world is too big and too diverse and is constantly changing, making such measurements virtually impossible. The solution is not in measuring carbon in trees. The solution is measuring carbon in the air."

The Orbiting Carbon Observatory will do just that: measure carbon in the air, from Earth's surface to the top of the atmosphere.

"NASA's Orbiting Carbon Observatory satellite will work as a detective from space, measuring the distribution of carbon dioxide thousands of times daily as it orbits the planet, providing the data to create very precise carbon dioxide maps that will help us confirm the whereabouts, nature and efficiency of the sinks absorbing the 30 percent of carbon dioxide that disappears each year from the atmosphere," said Steve Wofsy, a professor of atmospheric and environmental chemistry at Harvard University in Cambridge, Mass., and a co-investigator for the mission.

Carbon, a chemical element that is the basis of all known life and part of the chemical compound carbon dioxide, is the basic "currency" of the carbon cycle. It is "inhaled" by sinks to fuel photosynthesis in plant life. It is "exhaled" by natural sources when plant life dies or burns, and through human activities like the burning of fossil fuels, crops and forests.

If we think of Earth as "breathing," the balance between photosynthesis, or "inhaling," and respiration, or "exhaling," was about equal until humans began mining and burning large amounts of fossilized organic matter like coal, oil and natural gas a couple of hundred years ago.

Until about 1990, most scientists believed land was primarily a source of carbon dioxide to the atmosphere because forests are continuously being destroyed by human activities like deforestation in tropical areas, urban and suburban development, and land clearing for farming.

"The amazing truth is that on a global scale, photosynthesis is greater than decomposition and has been for decades," said Denning. "Believe it or not, plant life is growing faster than it's dying. This means land is a net sink for carbon dioxide, rather than a net source."

-- Carbon dioxide fertilization, a process often prominent in land areas, happens when more carbon dioxide in the air stimulates photosynthesis to produce a temporary "bump" in the growth rates of plant life.

-- Forest fire suppression, the aggressive extinguishing of forest fires that has led to preservation of more wooded areas than existed 100 years ago, saves trees that pull carbon dioxide from the air for growth.

-- Woody encroachment occurs when cattle graze on grass but leave behind carbon dioxide-absorbing woody shrubs that accumulate over land ranges throughout the western U.S. and elsewhere.

-- Lastly, carbon dioxide sinks are created when nitrogen in agricultural fertilizer or nitrogen oxide from car emissions dissolves into clouds, spreads for hundreds of miles on vegetation with rainfall, and acts in tandem with carbon dioxide fertilization to accelerate plant growth.

Past attempts by researchers to measure terrestrial carbon dioxide were limited by an inability to account for the different ages of forests or how disturbances to the forests have affected their ability to absorb carbon dioxide. Similar attempts to measure carbon dioxide in human-managed ecosystems like cropland, pastures, golf courses and suburban landscapes are also difficult because such areas are so varied and numerous.

"We're expecting the Orbiting Carbon Observatory to allow us to identify the precise geographic locations of these ‘missing' carbon dioxide-absorbing areas as well as the make-up of the sinks and the rate at which they soak up carbon dioxide," said Wofsy. "The efficiency of a sink and its location with respect to that of sources emitting carbon dioxide has critical implications for our ability to regulate carbon dioxide in global efforts to offset the well-documented global climate warming trend. We're anticipating a big step forward on this front with the Orbiting Carbon Observatory's help."