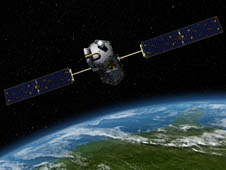 This experimental NASA Earth System Science Pathfinder Program mission will measure atmospheric carbon dioxide from space, mapping the globe once every 16 days for at least two years. It will do so with the accuracy, resolution and coverage needed to provide the first complete picture of the regional-scale geographic distribution and seasonal variations of both human and natural sources of carbon dioxide emissions and their sinks-the reservoirs that pull carbon dioxide out of the atmosphere and store it.

Mission data will be used by the atmospheric and carbon cycle science communities to improve global carbon cycle models, reduce uncertainties in forecasts of how much carbon dioxide is in the atmosphere, and make more accurate predictions of global climate change.

The mission provides a key new measurement that can be combined with other ground and aircraft measurements and satellite data to answer important questions about the processes that regulate atmospheric carbon dioxide and its role in the carbon cycle and climate. This information could help policymakers and business leaders make better decisions to ensure climate stability and retain our quality of life. The mission will also serve as a pathfinder for future long-term satellite missions to monitor carbon dioxide.

In the 10,000 years before the Industrial Revolution in 1751, carbon dioxide levels rose less than one percent. Since then, they've risen 37 percent. Between 1751 and 2003, human activities added about 466 billion tons of carbon to the atmosphere as carbon dioxide. The burning of fossil fuels, and cement manufacturing, account for about two-thirds of these emissions, while land use changes (primarily forest clearing) make up the rest. Humans are currently adding almost 30 billion tons of carbon dioxide to the atmosphere each year, and this rate of emission is increasing dramatically. In fact, carbon dioxide levels have risen by 30 parts per million in just the last 17 years, and are now increasing at about two parts per million by volume per year. The current globally averaged concentration is about 384 parts per million.

Of all the carbon emitted by human activities between 1751 and 2003, only about 40 percent has remained in the atmosphere. The remaining 60 percent has been apparently absorbed (at least temporarily) by the ocean and continents. Recent inventories of the ocean can account for about half of this missing carbon. The remainder must have been absorbed somewhere on land, but scientists don't know where most of the land sinks are located or what controls their efficiency over time.

Scientists monitor carbon dioxide concentrations using a ground-based network consisting of about 100 sites all over the world. But the current network does not have the spatial coverage, resolution or sampling rates necessary to identify the natural sinks responsible for absorbing carbon dioxide, or the processes that control how the efficiency of those sinks changes from year to year.

Scientific models have shown that we can reduce uncertainties in our understanding of the balance of carbon dioxide in our atmosphere by up to 80 percent through the use of precise, space-based measurements. Data from the existing ground-based monitoring network can be augmented with high-resolution, global, space-based measurements of atmospheric carbon dioxide concentration accurate to 0.3 to 0.5 percent (about one to two parts per million out of the background level of about 385 parts per million) on regional to continental scales. This level of precision is necessary because atmospheric carbon dioxide concentrations rarely vary by more than two percent from one pole of Earth to the other. The Orbiting Carbon Observatory will have this level of precision.

Scientists hope to use Orbiting Carbon Observatory data to address a number of questions about carbon dioxide and the carbon cycle. Among them:

Will those processes continue to limit increases in atmospheric carbon dioxide in the future, as they do now? Or will they stop or even reverse and accelerate the atmospheric increases?

Is the missing carbon dioxide being absorbed primarily by land or the ocean and in what proportions? Which continents absorb more than others?

Why does the increase in atmospheric carbon dioxide vary from one year to the next while emission rates increase uniformly?

How will carbon dioxide sinks respond to changes in Earth's climate or changes in land use?

What are the processes controlling the rate at which carbon dioxide is building up in Earth's atmosphere?

Where are the sources of carbon dioxide?

What is the geographic distribution and quantity of carbon dioxide emitted through both fossil fuel combustion and less well understood sources, such as ocean outgassing, deforestation, fires and biomass burning? How does this distribution change over time?

Following launch from California's Vandenberg Air Force Base aboard an Orbital Sciences Corporation Taurus XL rocket, the Orbiting Carbon Observatory will be placed in a near-polar Earth orbit at an altitude of 438 miles (705 kilometers), orbiting once every 98.8 minutes and repeating its orbit track every 16 days. It will fly in a loose formation with the other Earth-observing satellites of NASA's Afternoon Constellation, or "A-Train": Aura, Glory, Parasol, Calipso, CloudSat and Aqua. Flying in the A-Train will complement the mission's science return and facilitate observatory calibration and validation.