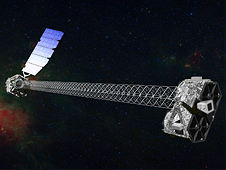 NASA's Nuclear Spectroscopic Telescope Array (NuSTAR) is being mated, or attached, to its Pegasus XL rocket today at Vandenberg Air Force Base in central California. The mission's launch is now scheduled for no earlier than March 21 to allow the launch vehicle team an additional week to complete necessary engineering reviews. After the reviews, the team will begin final preparations for the rocket's delivery to the launch site at Kwajalein Atoll in the South Pacific.

NuSTAR will probe the hottest, densest and most energetic objects in space, including black holes and the remnants of exploded stars. It will be the first space telescope to capture sharp images in high-energy X-rays, giving astronomers a new tool for understanding the extreme side of our universe.

NuSTAR is a Small Explorer mission led by the California Institute of Technology and managed by NASA's Jet Propulsion Laboratory, both in Pasadena, Calif., for NASA's Science Mission Directorate. The spacecraft was built by Orbital Sciences Corporation, Dulles, Va. Its instrument was built by a consortium including Caltech; JPL; Columbia University, New York; NASA's Goddard Space Flight Center in Greenbelt, Md.; the Danish Technical University in Denmark; the University of California, Berkeley; and ATK Aerospace Systems, Goleta, Calif. NuSTAR will be operated by UC Berkeley, with the Italian Space Agency providing its equatorial ground station located at Malindi, Kenya. The mission's outreach program is based at Sonoma State University, Calif. NASA's Explorer Program is managed by Goddard. JPL is managed by Caltech for NASA.